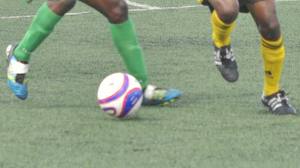 Nakuru based Top Fry All Stars, failed to climb to the summit of the FKF Division 1 zone B1 table standings after they were held to a one all-draw with eighth placed Kolongolo on Saturday at the Nambale grounds.

Kolongolo opened the scores through Paul Tete in the 53rd minute with All Stars second half substitute Daniel Kamau equalizing for the visitors seven minutes to the final whistle after piling pressure to the hosts who were in to defend their lone goal.

Kolongolo who had two matches over the weekend sprung back in their second match to crash a hopeless Shabana 2-0 at the same grounds. Shabana were eyeing their first victory of the season this weekend but their hopes were futile after a 2-0 lose in their first game against Mum Cop on Saturday.

The Kisii based team has not won any of the 9 matches that they have played loosing eight and drawing one. West Kenya remains favorites topping the league standings with 24 points, All Stars is second with 23 points while GFE 105 moved to third place with 22 points after holding off Timsales 1-0. Mum Cop seals fourth place with 21 points.

In Zone B 2 all eyes were focused on Vihiga All Stars after a 1-1 draw with Utawala on Saturday and 2-1 defeat to Agro Chemical who used the opportunity to move to fourth place. Oserian are leading with 25 points, Finlays 23, Hotsprings 23 and Kisumu Municipality trailing at the bottom with 3 points.