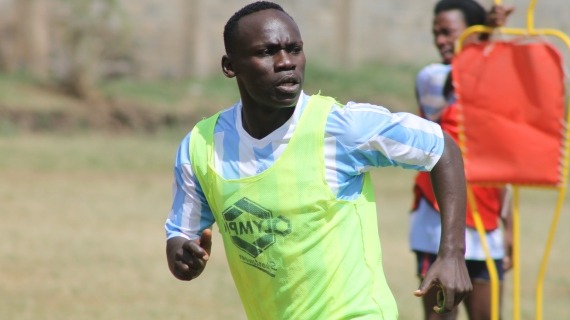 Kenyan Premier League top scorer John Baraza has attributed his team’s failure to reclaim their FKF Cup title to hard luck. Sofapaka won the 2010 edition of the Cup championship before being dethroned by Gor Mahia at the City stadium.

The two teams met again in the 2012 finals and the match had to be decided on post match penalties after a barren regulation and extra time.

According to Baraza, both teams had equal strength as penalties have no owners.

“Both teams played well. We worked hard to reach the finals and I have nothing more but to congratulate Gor Mahia for the win. We were unlucky, at times penalties have no owners and the lucky team wins the day.” He says.

Baraza has dismissed the superstition that Ivo Mapunda’s towel locked out their chances as he says,

“Those are beliefs that do not work in football. As Sofapaka we believe in God and I know Ivo Mapunda very well. I have played with him since those days in Tanzania and he does not at all believe in such supernatural powers. That is his face towel and I know goalkeepers keep a wet towel to keep their gloves in good grip, this happens even in Europe so fans and people should avoid creating controversy on the issue of the towel.” He adds.

Baraza says Gor Mahia has had a brilliant season this year and the win is a good finishing power for them after they missed out on the league title .

“Both of us (Sofapaka and Gor Mahia) wanted to win the FKF Cup after we lost the league title but I must say Gor Mahia had a good season and they also worked hard to win the cup. They know the final was not easy because we both gave our best. We had more chances than them and they were lucky to win the title. We will re strategize and plot well for the next season.” He adds.

“However, Gor Mahia should now concentrate on better performance in the CAF Confederations cup and post better results than their last participation where they were knocked out in the first round. The team needs maximum support from everyone and I know with good preparation they can do it.” Baraza challenged.