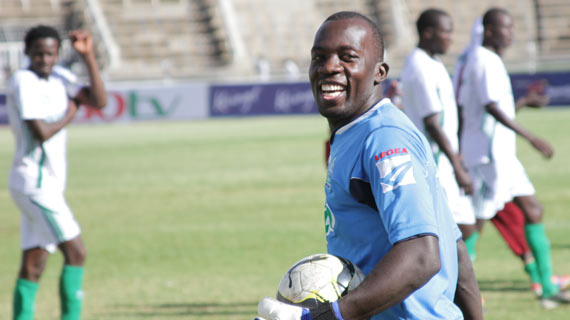 By DENNIS MACHIO 05 Aug 2012
FKF Cup defending champions Gor Mahia will not at any minute underrate little known Borabu Chiefs from Nyanza later today when the two teams meet in the FKF Cup match at the City stadium.

According to captain Jerim Onyango, the so called ‘small teams’ are the toughest in such competitions and underrating them can be disastrous to their title defense campaign. Gor Mahia won last year’s edition of the competition after beating 2010 champions Sofapaka at the same City stadium in the finals and Onyango says they are keen to retain their title especially at this time when the team seems to be facing some powerful rejuvenation under Croat Logarusic.

“This is a knock out tournament and underrating a team can be fatal. We will try and get early goals to destabilize them because given space , such teams can destroy your composure with shocking goals. We are mentally prepared to treat this like any other heavy match with the seriousness it deserves.” Jerim said.

The captain admits they know very little about their opponents but remains confident Gor will triumph at the end of the day.

“With this tournament, clubs are allowed to field different players apart from those playing in the league and it is possible that they could have recruited better players because they are coming to face us. And that is why as Gor Mahia we will not underestimate their strength; we will treat the match with a powerful character of wanting to retain the title that means we play our best.” Jerim concluded.