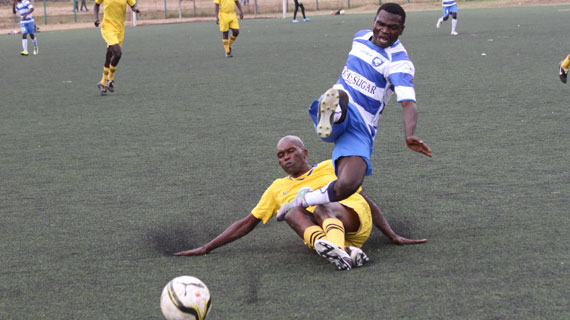 Sammy Omollo with a side block tackle

AFC Leopards fully unleashed their sharp claws to beat a hapless Wazee wa Kazi 5-0 in a FKF Cup second round knock out match at City Stadium on Saturday afternoon.

Ingwe  captain of the day Mike Baraza opened the goal flood gates 20 minutes into the match beating the veteran’s custodian Paul Otieno before Allan Wanga chipped in a second as the one way traffic continued.

Noah Wafula made it 3-0 before the break through a solitary effort after making a penetrating run on the right flank.

After the break, Ingwe wrapped up the game with Oscar Kadenge son to the legendary Joe Kadenge and   midfield powerhouse Peter ‘Pinchez’ Opiyo putting their names on the score sheet in the 60th and 75th minutes respectively.