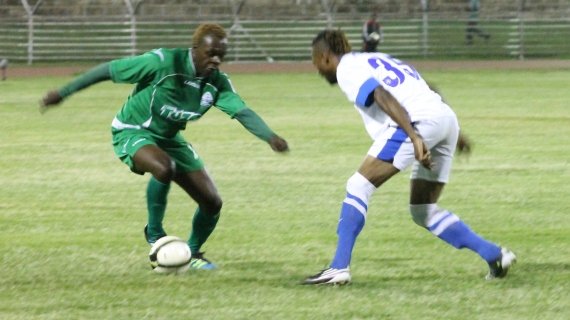 Gor Mahia are the 2012  FKF champions after a 3-0 win over Sofapaka in post-match penalty shootouts during the final played at Nyayo Stadium on Tuesday evening. The teams could not unlock the deadlock in normal and extra time thus occasioning  a penalties  shootout that would leave Gor Mahia with a ticket to represent the country in the CAF Confederations Cup and completing a season double this season.

In what was a repeat of last years' final,Gor Mahia began the match on a high. Kevin Omondi latched on to a Moses Odhiambo pass, weaved his way into Sofapaka danger zone then  tries to curl the shot but keeper Ochieng makes a save.In the 5th minute Ivan  Anguyo tried  an optimistic shot that went  over the bar.

Then Sofapaka had their chance. An Intelligent pass by Heritier  Luvualu was met by  Joseph Nyaga who turned well  but Mapunda's quick intervention provided an obstacle to  foil the attempt

Then the unusually quiet Dan Sserunkuma then released a good cross from the left wing but Rama Salim's height made it hard for him to head it. Anthony Akumu followed with a good long distant shot that keeper Duncan Ochieng punched   out for a corner.

A lovely free kick executed by Heritier Luvualu missed the target by inches. Before John Baraza set up Anthony  Kimani who fired wide.

After the break, Dan Sserenkuma shot wide before a goal mouth melee ensued at Sofapaka side.Kevin Omondi sent a good cross but miscommunication between Joseph Njuguna and Dan Sserunkuma spared  Sofapaka the blushes.

Humprey Mieno’s low drive in the 62nd minute proved an easy pick for keeper Mapunda. Mieno would four minutes later fire a free kick that evaded the keeper but luckily it missed the target by a whisker.

In the 83rd minute a well placed header by John Baraza from a corner beat the keeper but not the woodwork. Then Ali Abondo had his chance on the opposite end but his long range effort went over the bar

Moses Odhiambo was presented with a great opportunity when Duncan Ochieng was unable to hold on to Kevin Omond shot but Asieche managed to clear the ball before he could shoot.

Joseph Nyaga’s shot was denied by the post then TPL golden boot winner John Baraza missed a tap into an empty net. The near misses added to superstition that the now famous Ivo Mapunda towel was indeed  doing  some magic.