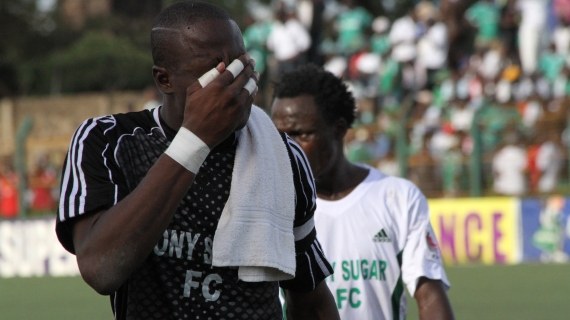 Gor Mahia’s chance of clinching a double,christened “Gigiwasekao” by fans, remain alive after a 4-2 win over Sony Sugar in post-match penalties at a slippery Kasarani Stadium on Saturday afternoon. The match ended nil nil on normal time.

Gor Mahia had the first chance of the match when Paul Kiongera was fouled by Charles Odette inside the box. Kevin Ochieng stepped up to take the resultant spot kick but  Sony keeper Wycliffe Kasaya read him well and comfortably saved the shot.

In the 20th minute, Edwin Lavatsa’s free kick went wide of target .Immediately Sony laucched a counter attack but Wanyama placed the ball at the past the  bar.

Moses Arita had the best chance to give Sony the lead but he was unable to beat Ivo Mapunda in the 33rd minute on a one-on-one situation.

At the end of the first half, Gor Mahia’s  Israel  Emuge seemed to have been fouled by Joseph Omweri but the referee waved play on despite calls for a penalty by K’Ogalo players and coach Bobby Williamson

Immediately after the break, Kevin Omondi shot twice at the top of the bar as Gor  Mahia intensified their attacks.

Sony Sugar lived to their tag of a hard nut to crack as  even Coach Williamson bringing in  in Patrick Oboya in the last six minutes in place of Mungai Kiongera did little to break the deadlock.

Odete’s shot was saved by keeper Mapunda while Ben Baraza’s shot went wide of the target.

Gor Mahia who are almost certain of clinching the Kenyan Premier League title will now meet either Sofapaka or AFC leopards in the final. The two semi-finalists will lock horns on Sunday.