Gor Mahia and AFC could meet in FKF Cup Semis 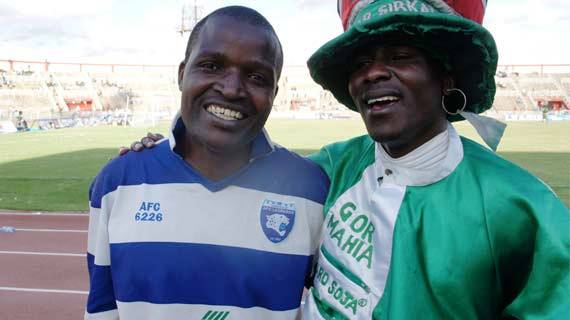 Gor Mahia and AFC could meet in FKF Cup Semis

By TIMOTHY OLOBULU 07 Aug 2012
Kenya’s soccer arch rivals AFC Leopards and Gor Mahia could meet in the FKF Cup Semi finals for the second time in a row, if both sides win their last 16 and quarter final matches.

Will it be a case of lightening striking twice on the same ground? Last year, the two met in the Semis, Gor walking away 1-0 winners though the match did not end as a section of AFC Leopards’ fans caused chaos and disrupted the match. The then federation, FKL, made a decision to award K’Ogalo the match after receiving reports from the match officials.

Leopards and Gor were set to play two weeks ago in the KPL Top 8 but Leopards boycotted the match that was later awarded to Gor Mahia.

Gor Mahia will play Western Stima in the last 16 stage in the first week of September, with Leopards travelling to the Coastal town of Mombasa where they play Congo United. It will be remembered that Congo United eliminated Gor Mahia last year at the same stage but the latter sailed through as best losers and went ahead to win the competition.

According to the draw, if current KPL league leaders AFC Leopards win their match against Congo United, then they will meet the winner between Karuturi Sports and Nairobi Stima.

And if FKF Cup defending champions Gor Mahia win against Stima, they will meet the winner between Muhoroni Youth and Kakamega Homeboys in the Quarters.

The FKF Cup is a knockout tournament with no return legs, but with the draws the lucky teams will be playing at home.