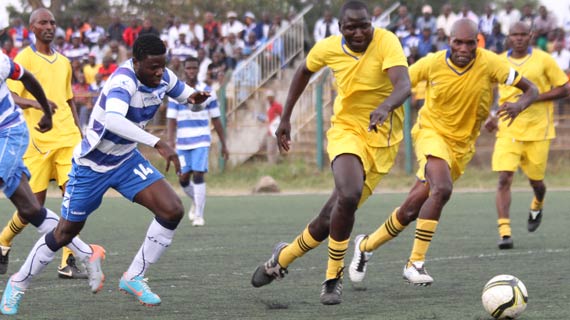 AFC vs Wazee Wa Kazi in teh second round

The Kenyan Premier League action will take a break this weekend as the FKF/Gotv Shield Cup pre quarter finals takes center stage in various fields across the country with the Western derby of Homeboyz and Western Stima being one of the highlights.

The two teams will be in action on Saturday at the Bukhungu stadium that plays home to both sides in the Kenyan Premier League.

Just a week after handing AFC Leopards a 3-1 smack at their sponsors’ face in Mumias, Chemelil Sugar travel to Nairobi for another date with the same Ingwe that will be under a new coach this time round.

The Leopards management made technical bench changes on Tuesday sacking Eymael and hiring James Nandwa who takes over immediately.

Defending champions Gor Mahia will be in action on Sunday when they play Thika United at City.

Kariobangi Sharks and Finlays are the only two Division One clubs still standing strong in the domestic Cup competition whose winner will represent Kenya in next year’s CAF Confederations Cup.