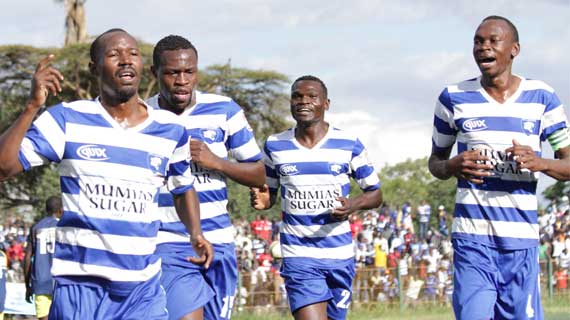 A potentially bruising GOTV Shield semi-final matches are on the cards after holders AFC Leopards set what is expected to be a mouthwatering showdown with 2010 winners Sofapaka while second tier sides West Kenya and Rangers FC also set their own fight dates.

From the outcome, it goes without saying that the finale will pit a top tier side against second tier opposition. West Sugar will have to be at their sweet best when they face the acidity posed by a Rangers side that has so far benefited from the glut of experienced players formerly plying their trades in the upper division if they are to clinch a ticket to the finale.

For Sofapaka, storming to the last four has come as a great relieve. They have not lifted a Silverware since 2010 when they last triumphed in the same competition and subsequent attempts in 2011 and 2012 have ended in heart breaks after suffering painful defeats to Gor Mahia.

With AFC Leopards, it promises to be bloody football fight going by the level of opposition and the disastrous run the big cats have had in the season so far.

The Domestic Cup is Ingwe’s sure bet and should soothe the egos of their image battered fans who have seen their team’s fortunes plummet and capitulate in the tight fixtures that has become of the Kenyan League.

Sunday was one of their most memorable afternoons staging a fierce comebacks to pull a 3-2 coup over Tusker. Coach Hendrik Pieter De Jongh needs to stick to his script and modify where need be to sail  to the finale and lift the gong if he is to save his skin and protect his job that has been quickly been drifting from his stranglehold.

Sofapaka had no tough date at the quarters easily rolling 3-1 past Nationwide club Administration Police (AP) in an ill- tempered Sunday midday kick-off  at the Nairobi City Stadium while Rangers overpowered league side Bandari 1-0 at  the same  on Saturday . It is this same scoreline that earned West Sugar a spot in the last four at the expense of Agro Chemicals.

Winners earn slot to represent the country in the Caf- Confederation Cup next year, a trophy and Sh. 2 million cash prize