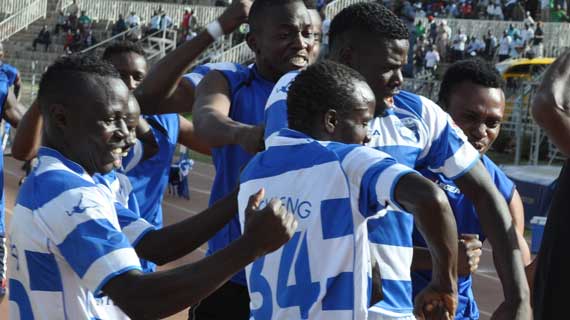 Coach Jans Koops dream of guiding AFC leopards to a double and playing in continental football next season remained alive after the Kenyan Premier League leaders beat Mathare United 2-0 at Nyayo Stadium on Saturday to sail through to the round of 16 of the FKF Cup.

New Burundi import  Floribert Ndayisaba who got his transfer clearance recently made it to the starting eleven for Ingwe.AFC started the match the stronger side but despite continuous attacks, Mathare stood firm to end the first period on a barren score line.

AFC got their first goal through sub Jimmy Bageya who had come on for Jonas Nahimana. Bernand Mango’li sent a cross that Allan Wanga headed well, Mathare United keeper saved but Bageya was at the right place to fire in the rebound from close range.

Mangoli was also the provider of the second goal as he released Wanga. The Simba FC target rounded off the keeper then calmly put the ball into the net to double the advantage.

Despite coming on as a substitute, Jimmy Bageya did not last the whole game as he got injured  and had to be replaced.

FKF Cup defending champions Gor Mahia will be clear favorites on Sunday when they take on Borabu  Chiefs from Kisii.