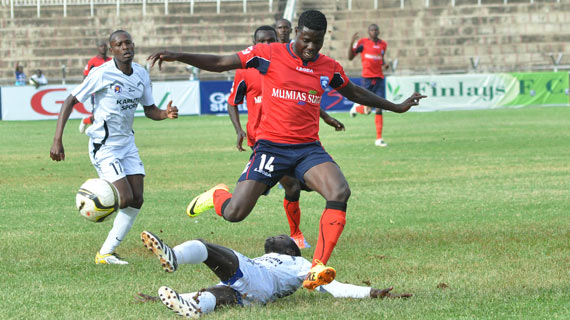 The Leopards came breathing fire and only took seven minutes to break the deadlock. Charles Okwemba opened the floodgates after capitalizing on a goal mouth melee after Karuturi keeper had failed to hold on to a corner ball .

Two minutes later, in-form Allan Wanga beat his marker then placed a low shot past the keeper to double the lead. The duo scored during the last match against Muhoroni Youth.

With their plans in disarray, Karuturi tried to construct passes  but never posed any threat to the well-oiled AFC Leopards, well backed by thousands of fans.

The score line stood at 2-0 at the half time interval.

Allan Wanga who was voted the man-of-the-match for the second game in a row secured his brace  in the 63rd minute when he finished off Paul Were’s  assist.

AFC Leopards, Sofapaka, Gor Mahia and Sony Sugar are the four finalists in this year’s GOTV Shield Cup. A win for Gor Mahia and AFC Leopards will set another stage for a Shemeji derby in the final.