Ref sues Nyamweya for 20m on loss of conjugal rights 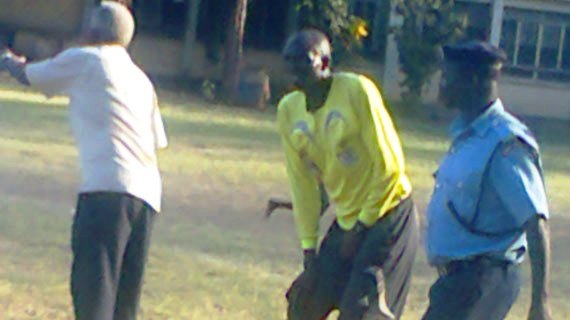 Ref sues Nyamweya for 20m on loss of conjugal rights

The ref when he was injured in Mombasa

On 22 September 2012, a Division One match derby between arch rivals Admiral and Sparki Youth played at Tudor Day in Mombasa was abandoned two minutes to time after the center referee Martin Wekesa Wamalwa was knocked on his private parts by irate fans and left for the dead.

‘’That my principal sustained very serious injuries by the sole negligence of your part and thereby puts you liable for a maximum compensation of ksh 20,000,000/= which have been arrived in the following manner;

-That a doctor’s report reveals that my principal has suffered permanent incapacity and can no longer enjoy his conjugal rights as required by following extensive damage to his sexual organs.

-That it is my humble demand that you do good immediate settlement of the compensation in the sum herein before mentioned in the next 30 days from the date of this letter and your failure to do so,

TAKE NOTICE that a suit will commence against yourself for recovery of the same and at your costs and expenses arising there from’’ the letter says.

It also adds that FKF did not abide by the FIFA rules which dictate that a referee should be given adequate security, something that never happened on the fateful day. It also tries to justify the 20 million shilling sum saying the referee is on life long medication which is expensive. Also, it states that due to the situation, Wamalwa cannot continue with his normal movements hence can’t earn a living.

The demand letter is copied to Doris Petra, the chairperson of the leagues and competitions, Michael Esakwa, the FKF Secretary General and Evans Mwachia , the FKF South Coast Branch Secretary.