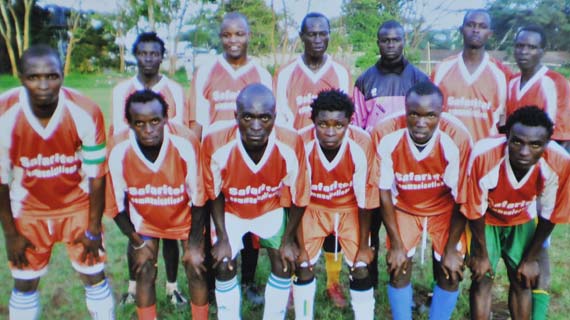 Re-Union Football club is  now in the red. The glamour team, perhaps the oldest in the  country is pleading for financial assistance   from well wishers to honor their league assignments

Club Vice Chairman Charles Omollo Tude has sent an urgent ‘save our souls” S.O.S alert pleading for  good  Samaritans  to  come and   bail the club  before it closes its  shop.

According to Omollo, those wishing to   team up  with the club can send their donation through paybill No. 885816  to sustain its   daily operation.

The club is participating in the on-going Football Kenya Federation(FKF) Division  one  league.

‘We are pleading for  help  from every good  Samaritan who has the heart of  giving. We are also looking  for a  partner or a suitable sponsor who can market his goods through  our club. We are also embarking on ways of  introducing a strong sacco where   members  can buy shares. We  have  good things in the  pipeline coming  but first we need  funds  to sustain our  club.”Observed Omollo.

Under Chairman   Rading Omollo,Re-Union who have  recruited talented players  drew 1-1  with Langata based Iron Strikers  over the weekend at the Kenya school of law grounds. Last week , they were held to a  barren draw  by visiting  Mombasa bases Westham  at the Ziwani Grounds.

Trailing 1-0 before the breather,Re-Union came back in the second half firing from  all their cylinders  with Evans Okello equalizing in the 70th minute after receiving a  nice pass from Samuel Matara to shatter Strikers  hopes of grabbing all the  points on offer.

Coached by Salim Issa, the club boast of talented players led  b Kenyatta University student Joel Mkasa,Goalkeeper Zadock  Osango,John Otieno,Meshack Odeny, and Hamisi Mkangi among others.The club has produced some of the  finest players in  the country  led  by John ‘Kasongo”Odue,Mathew Otamax,Ben Gachie,Vincent Otinje ,Henry Ochido and Seif Mutie  who is  the current organizing secretary of the club.