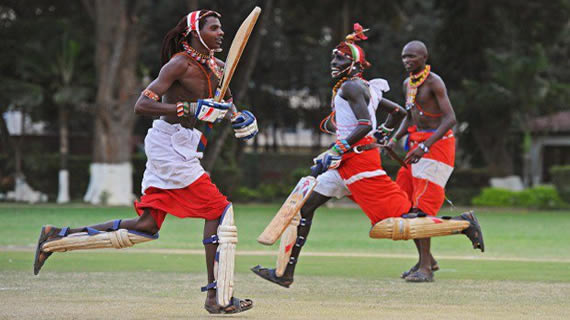 The incredible story of Maasai warriors who have traded their spears for the cricket bat continues to amaze many across in Kenya and across the world. Now the team (Maasai Cricket Warriors)  is preparing for  The Last Man Stands Cricket World Championships in Capetown, South Africa between 31st March and 7th April 2012.

While in South Africa, the Maasai Warriors XI will be acting as ambassadors of the Think Wise AIDS Awareness programme and they will be delivering important social messages on behalf of the International Cricket Council.

Moreover, the Maasai Warriors XI will be ambassadors for Kenya, and they will be promoting Kenya and tourism in Kenya. They will be playing in traditional Maasai attire, and so will stand out amongst the competing teams.

Maasai Warriors from the Laikipia region in Kenya have exchanged their spears for cricket bats and they are using cricket as a vehicle to empower youth and to target social problems in order to bring about positive change in their communities.

Having seen the game introduced to local schools, the Maasai community's interest was soon piqued. Their formidable physiques and expert spear-throwing has meant that many have taken an interest in fast bowling, and now it is commonplace to see the warriors playing games amongst themselves – all whilst fully clad in traditional Maasai attire!

Over the past few years, Maasai Warriors from Laikipia have dropped their spears and replaced them with cricket bats, and along with renowned British NGO Cricket Without Boundaries (CWB), Maasai Cricket has transformed into an organisation making waves in the international community.

The project has been featured on Kenyan national and international television, prominent British newspapers and websites, and recently, the Maasai Cricket Warriors were appointed by the International Cricket Council (ICC) as official ambassadors for their 'Think Wise' initiative for AIDS prevention, which is a joint partnership between the ICC, Unicef and UNAIDS. CWB have led several successful projects in the region, further introducing cricket to communities and now cricket is being played at 15 Primary Schools, 5 Secondary Schools and 3 Youth Groups in the area. Coaching clinics and coach education has been held, and there are now over 54 certified coaches in Laikipia. As well as gaining cricket knowledge, these coaches are now trained to spread the message of AIDS prevention.

The Last Man Stands World Championships is an annual international tournament, to be held this year in Cape Town, South Africa, from 31 March to 7 April. It consists of amateur teams from around the world playing several T20 group matches, followed by a knockout stage and a final. LMS offers a first prize of US$10,000, receives considerable media exposure, and will provide a great platform for the Maasai Warriors to spread their message.

On the days that the team will not be playing or where there will be time available in their schedule, the Maasai Cricket Warriors team plan to visit youth groups and schools to spread AIDS awareness messages, and to engage the youth and children in cultural exchanges.

The tournament organisers will also be holding fundraising events during the tournament for Maasai Cricket. The goal is to use some of these funds towards providing partial or full scholarships to talented children in Class 8, to enable them to attend secondary schools with cricketing facilities, thereby continuing their education and allowing them the chance to continue developing their cricket skills.

Some of the funds will also be used to train coaches as VCT counselors, so that they can double-up as cricket coaches who are able to conduct HIV testing and counseling amongst the players. This will contribute a big way in trying to manage the spread of HIV amongst Maasai communities.

Without financial support, the Maasai Warriors will be unable to participate in this tournament. The development of the sport will remain stagnant, at a time when it is on the verge of precipitating lasting change within a community in desperate need of help.