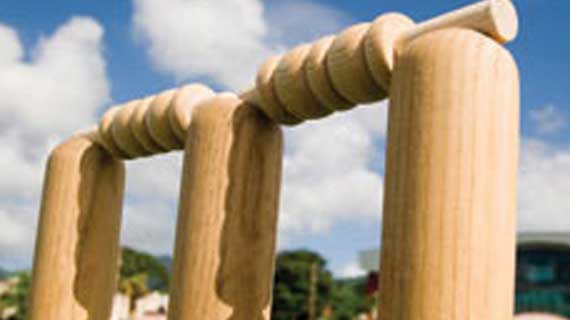 Pakistan U-19 skipper inspired his side with an unbeaten 112 as his side completed the whitewash of Kenya U-19 in their five match series with a 225 run win in the final one day match played at the Nairobi Gymkhana. The start of this match was delayed by an hour due to a wet square and was thus reduced to 47 overs a side.

After winning the toss and opting to field, Kenya U-19 opening bowlers Arjun Patel and Rahul Seedhar restricted the opening pair of Youssef Baber and Sajawal Riaz to 25 runs in the first six overs. Riaz then upped the run rate getting the visitors to 68 runs by the 15th over. Two balls into the 16th over, Paramveer Singh blew off the bails of opener Baber to put the scores at 68/1.

Saud Shakeel, the Pakistan skipper, was next on the creasse and put a partnership of 75 with Riaz before the latter was bowled by Micheal Nadwa leaving with board reading 143.Shakeel continued the run fest with a knock of 112 from 83 that had 15 fours in it before opting to retire not out and bring out Aqib Javed. His knock earned him the Stray Lions Cricket Club man of the match award.

Imran Rafiq was going for the runs till he opted to join Shakeel on the “retired not out”list on 33 runs. This move left Kamran Afzal as the main batsman for Pakistan scoring 46 not out in a knock with 2 fours and 4 sixes. His partners Shahid Khan, Awais Iqbal and Asif Mohammed fell on 3, 4 and 15 runs respectively as the guest team made a total of 329 for 6 in the allotted 47 overs.

Kenya's reply started with Aman Ghandi and Kavi Dosaja putting four runs before Ghandi was bowled by Asif Mehmood when on a single. Mehmood then took the wickets of Rahul Seedhar on 2 runs and Mohammed Kalyan for a duck to leave the home team on 20/3 at 5.3 overs.

Next to fall were Dennis Musyoka on 4, Ardash Sawjani on 14 Tembhekar getting run out with 21 runs. Paramveer Singh stepped up and made 21 runs that had 3 boundaries before falling to Awais Iqbal with the score at 100/8.

The last 2 wickets fell in four runs, Nischay Kerai going out to Shakeel and Michael Nandwa going out lbw to Awais Iqbal to see Kenya make 104 all out in 30.5 overs.

Asif Mehmood was the Kenya's executioner in chief with 4 wickets. Awais Iqbal took 3 wickets, while Ahmed Bashir and Saud Shakeel took one apiece.