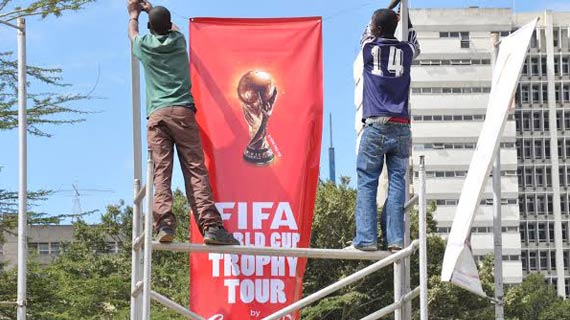 The chartered plane carrying the authentic, solid-gold FIFA World Cup Trophy will touch down in Nairobi on Wednesday as it continues its globetrotting odyssey across nations courtesy of the Coca-Cola Company.

The iconic diadem arrived in Africa almost a fortnight ago and has passed through Egypt, Algeria, Morocco and Ghana before embarking on a journey from West to East Africa.

The trophy will land at the Jomo Kenyatta International Airport (JKIA) in the wee hours of the morning aboard a 40-passenger McDonnell Douglas (MD) 83 aircraft. It will be accompanied by three flight attendants, officials from International Football Federation (FIFA) and Coca-Cola among others.

President Uhuru Kenyatta, the only person in Kenya entitled to lay hands on the 18-carat gold trophy, will receive the trophy on behalf of Kenyans later in the day.

The trophy will spend two days in the capital before departing to neighboring Tanzania then to the venue where it was won by Spain in 2010, South Africa. The tour is part of Coca-Cola’s gift to Kenya as she celebrates its 50th year anniversary.

This is the second time Kenya is playing host to the trophy after its maiden trip in 2009.

Kenya is among 88 countries worldwide and 8 in Africa hosting the most coveted prize in the world of sports. The tour started at the Christ is the Redeemer Statue in Rio de Janiero, Brazil in September.

Meanwhile thousands of  Kenyans who have been anxiously waiting for the trophy will get a chance to get a close-up view of the iconic silverware at the Kenyatta International Conference Center (KICC) on Thursday the 28th. The public viewing event will start at 9am and run to late evening giving way to electric performances by some of Kenya’s top artistes.

Sponsors of the trophy tour, Coca-Cola, have been running promotions through road shows, social media as well as on radio and television stations where they have given thousands of free tickets to football lovers to attend the once in a lifetime event. The fans will not only stand a chance to win Coca-Cola merchandize but will take home a souvenir photo with the trophy.