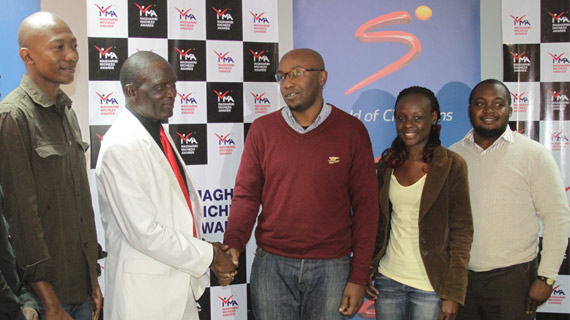 The first edition of the Magharibi Michezo Awards (MMA) was officially launched at Nairobi's Clarion Hotel on Wednesday 18 December 2013.

Speaking during the launch, MMA Chairman Michael Kwambo observed that the awards are an endeavor to reward leading lights, mentors and upcoming sporting talent from the Western Kenya region.

He said, " Over the years Western Kenya has been the cradle of Kenyan sports. Year after year the region has churned out several sporting heroes that have represented the country across all sports spectrum. From Volleyball, Rugby, Hockey, Handball, Basketball and Soccer just to mention but a few."

"The Magharibi Michezo Awards (MMA) is the premier sports awards ceremony in Western Kenya geared towards rewarding the achievements of the region’s athletes while celebrating the excellence of our sportspeople as well as encouraging the next crop of sports talent across the spectrum."

"The first edition of the Magharibi Michezo Awards will be held at the Mashariki Afrika Sports Leadership School in Bungoma County on Friday 20 December 2013. Future events will see interested counties within what can be clustered as West Kenya bid for hosting rights and it is envisaged that the MMAs will grow to include other counties such as Kisumu, Siaya, Kisii, Kericho, Trans- Nzoia which are in the vicinity and when clustered with these four can be loosely refered to as West Kenya", he concluded.

The event also saw Southampton and Kenya midfielder Victor Wanyama support the event with a contribution of Ksh 50,000. He was represented at the function by his father, Noah Wanyama, a former AFC Leopards and Kenya legend. Speaking at the event, the senior Wanyama said, " I am very proud of this initiative geared towards recognizing the sports talent from this part of the world. This is a very noble initiative and I call upon more well wishers and sponsors to come on board and ensure that this event grows to have a permanent place on the Kenyan sporting calendar."

Supersport also came to the aid of this event, donating PVR decoders to be given to some of the top performers. Others who chipped in include Nairobi lawyer Edwin Sifuna, CECAFA Secretary General Nicholas Musonye, Dengal Creatives  and leading football match official Nasur Doka.