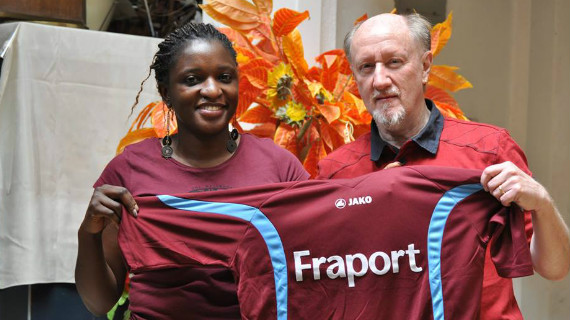 Michezo Afrika Foundation received a boost for its programs when German based Gerhard and Hamida Krollmann paid them a courtesy call on Wednesday to donate a full kit of playing kit shirts, shorts, stockings and  playing boots.

Speaking during the presentation Hamida Krollman, a native of Bungoma County said ‘ I have followed with a lot of admiration the activities of  Michezo Afrika Foundation over the past few years and got inspired to do something.

“ I asked my husband, who is a former soccer player, about contributing to their worthy initiatives and we soon got connected with his former club Teutonia Weiler F.C and we got this donation.”

“We hope that this will be a big boost to the foundation’s programs as well as the beginning of bigger and better relations,” she concluded.

Michezo Afrika Foundation founder Walter Machio thanked the Krollmans for their generosity and assured them that their donation will be put to good use.

He said, “We are humbled by this gesture and we believe these initial footprints will be followed by others. We shall look back in years when one of these lads turns out for a big team in the Bundesliga and remember this day. From us at Michezo Afrika Foundation we say 'ich danke Ihnen vielmals.”