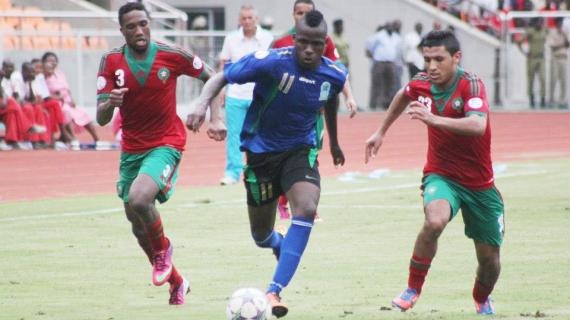 It was a weekend of mixed fortunes for East African Countries with Kenya and Tanzania registering positive results against formidable opponents. While Kenya succumbed to a last minute goal to draw 1-1 with the Super Eagles of Nigeria in Calabar, The Taifa Stars were in exemplary form beating Tanzania 3-1 at the National Stadium in Dar Es Salaam.

TP Mazembe duo of Thomas Ulimwengu and Mbwana Samatta were the engineers of the huge Tanzanian win in Dar. Ulimwengu opened the scores in the 46th minute before Samatta’s brace in the 67th and 80th minute ensured the victory for Kim Poulsen’s side.  El Arabi’s goal in the 94th minute was not enough to spare the blushes for the Atlas Lions.

The victory now leaves Tanzania second in Group C with six points after two wins and one loss.  Ivory Coast lead the group with seven points after a 3-0 thrashing of Gambia in Abidjan. Bony’s penalty opened the sciores in the first half before Yaya Toure and Solomon Kalou rubber stamped the victory.

In Monrovia, the Uganda Cranes were condemned to a 2-0 loss at the hands of their hosts Liberia who climbed second in the group, Uganda sitting at the basement. Wleh and Laffor struck the all important goals for the Liberians. Uganda will now need to beat them in the return leg in June at the Namboole Stadium to keep alive their hopes of qualifying to the 2014 World Cup in Brazil.

Senegal still lead the group with five points after their  1-1 draw with Angola at home.

In Group H, Rwanda were almost grabbing a win against Mali in Kigali but two late goals from Mamadou Samassa and Armand Traore denied the Amavubi victory after Meddie Kagere had opened the scores in the first half. Mali lead the Group with six points while Benin are second.

In Addis Ababa, Gataneh’s 88th minute goal proved all important as Ethiopia went top of Group A with seven points after a 1-0 win over Botswana. South Africa who beat CAR 2-0 with goals from Matiaba and Bernard Parker are second with five points.

Tunisia stretched their lead in Group B to nine points after a 2-1 win over Sierra Leone in Tunis. Equitoreal Guinea’s Rincon scored an 88th minute winner in a seven-goal thriller as the hosts beat Cape Verde 4-3.  Djaniny had scored an 85th minute equalizer to giove some hope to the 2013 AFCON Quarter finalists but some lapse of concentration in the dying minutes denied them a point from Malabo.

2012 African Champions Zambia were held on to a one-all draw by hosts Lesotho. Collins Mbesuma had scored a 73rd minute opener for the former African Champions but a 89th minute goal from Marabe earned Lesotho a point. Zambia however still lead Group D with seven points, one ahead of Ghana.

The Black Stars were 4-0 nwinners against Sudan in Kumasi. Asamoah Gyan opened the scores in the 19th minute, Barack Wakaso adding a second in the 38th minute. Second half goals from Waris and Agyemang-Badu ensured Ghana walked away comfortably.

Egypt who play Zimbabwe on Tuesday still lead Group G with six points after Mozambique and Guinea played to a barren draw in Maputo.

Samuel Eto’o’s brace in Yaonde ensured Cameroon beat Togo 2-1 to take control of the pool with six points. After holding DR Congo to a barren draw, Libya are second in the Group with five points.

The next round of matches will be played between 5th and 7th June from where the boys wuill be separated from the men and the race to Rio De Janeiro will take a new shape.