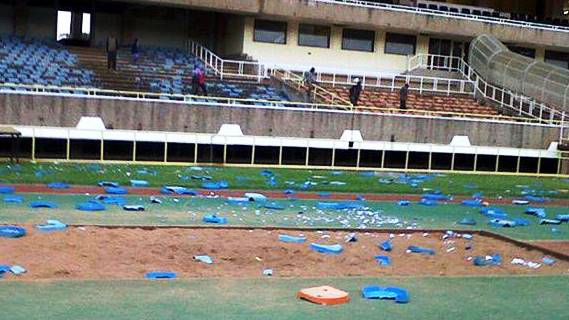 Up to 1987 Sports was just but a mere sub unit in the department of social culture under the ministry of Culture and Social Service, despite the triumphant glory that sports had brought to our nation. This was a tradition maintained by Former President Daniel Arap Moi when he ascended to power after the death of our founding President Mzee Jomo Kenyatta.

In 1987 through a presidential decree by the then President Daniel Arap Moi, sports was elevated into a department still under the Ministry of social services after the colorful host of the 4th all Africa games in Kenya where notably, Harambee Stars narrowly lost to Egypt in the finals not forgetting the sterling performance of our track and field athletes.

The Ministry of Sports, culture and arts has completed the Metamorphosis of sports administration in Kenya. In the structure of Government realeased yesterday by President Uhuru Kenyatta and Deputy President William Ruto Sports ministry is one of the stand alone ministries that have heralded a new dawn of optimism and bright future for many talented Kenyans.

This is a manifestation of the Jubilee Government’s intent in prioritizing sports as one of the key pillars of social economic development. In his inaugural address to parliament President Uhuru emphasized his promise of sports development.

Contacted for comment on the new development an elated commissioner of sports Gordon Olouch was expectedly overjoyed with the prospect of Sports being a stand –alone entity in the government.

“This is a great honor to sports in this country. I am very glad that sports has come of age, I recall how sports in post independence Kenya was just but a mere sub unit in a department. The onus is now on us to better what we had started before to provide even a better future for our sports men and women.”

Olouch continued to say that “it is now up to us to build on this new recognition so that our people especially the youth can reap maximum benefit from sports and those who shall not be competing at the elite level would also get an opportunity to participate in sports for recreation and good health.”

Mr. president, we are waiting with baited breath that the person to be appointed as a cabinet secretary in the sports ministry would be preferably one of our own sports comrades, a person not only with a bigger vision for sports in this country but one with stronger muscles to flex and streamline some of our underperforming Federations

Let me submit to you my fellow Kenyans, it is my hope that, gone are the days when our national teams and clubs would fail to participate in continental competition for lack of planning and finances, gone would be the days that our national teams would be denied access to national stadiums for training purposes and finally that our federations and sports associations would be held accountable to the people of Kenya.

Salute to you President Uhuru Kenyatta and Deputy President Willaim Ruto. Please mark in your diaries June 5th as your second Official visit to Kasarani Stadium not for inauguration but to be introduced you to passionate Kenyans. Dress code “NO SUITS JERSEY’S ONLY’.