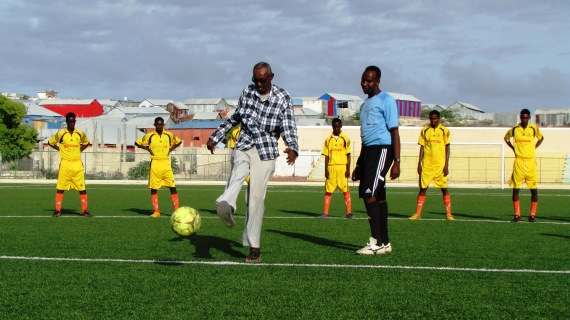 Somalia’s first ever National football squad captain Mohamed Qalaf Aden Shangole has been admitted to Mogadishu hospital after he fell sick at his home town of Jowhar about 90 kilometres north of the capital Mogadishu.

The old star became unconscious and was rushed to the capital for medication on Wednesday where he is currently receiving treatment at Aflah Hospital south of the capital.

Somali Football Federation officials are reportedly worried about the future of the veteran footballer who is now in a serious condition according to Dr Ibrahim Dasuuqi, the head physician at Aflah hospital.

“He is still in coma, but we diagnosed him and we are trying to do our best” the physician told Somali Football Federation officials at the hospital on Thursday.

SFF secretary General Abdi Qani Said Arab requested physicians and nurses at the hospital to pay a particular attention to the ailing former Ocean stars member who situation deteriorated later on Thursday according to hospital sources.

The Old star who is still serving as the regional football commissioner of the Middle Shabelle region visited the SFF headquarters in Mogadishu two weeks ago from where he took different kinds of football equipment as he was in the final stage of the preparations for the upcoming district level football tournament in his region.

He is also the legal advisor to the president of Somali Football Federation.

Messages of goodwill and prayers have been pouring into the Somali Football Federation office since the news of the old captain’s sickness came to light on Wednesday.