Namwamba: What if Arsenal and Celtic played at Kasarani? 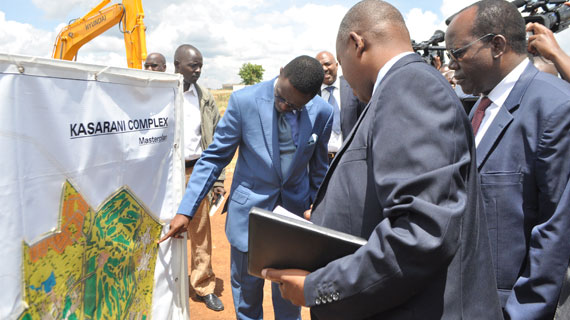 Namwamba: What if Arsenal and Celtic played at Kasarani?

Minister Namwamba during the academy launch

Though the names of the two clubs are yet to be mentioned, speculation is rife that one of the most popular clubs in this region, Arsenal, is one of the targeted clubs. Organizers (Open Side) said they are in talks with multiple top level clubs in Europe and the names of the clubs will be revealed soon.

While speaking during the ground breaking ceremony of the International Sports Academy at Kasarani on Tuesday, Namwamba said, “What if Arsenal and Celtic came to play in Nairobi?”

“You can imagine the kind of attention Kenya will receive all over the world if Arsenal or Celtic were to play in Kenya. The focus of the world will be on Kenya. This will also be a challenge to the government to improve sports facilities to world class standards and also improve sports security for teams and fans. In the end everybody who visits our stadia will feel safe during sporting events.”

Namwamba adds that sports is the best seller of Kenya’s brand giving an example of David Rudisha’s performance at the London Olympics.

“In less than two minutes, David Rudisha’s world breaking run served as the best marketing tool for Kenya. We need to market this country more robustly through sports and the magic Cup provides such a great opportunity.” He added.

The minister called on sponsors and stakeholders to join hands with the government by coming on board to support the initiative that will also work towards selling Kenya as a great tourism destination.

“The take off of the Magic Cup will be a major shot in the arm to the Kenyan economy and this is a big challenge for all of us.” He said.

“I assure you that you will be seeing very major clubs coming to play in Nairobi in this magic Cup. We want to join the international circuit of Kenya hosting some of the top elite clubs in EPL, Bundesliga and La Liga. We are very serious about the initiative that is fully supported by the ministry.” He continued.