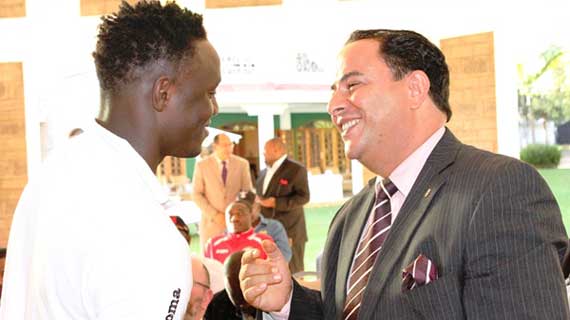 Victor Wanyama with Morocco Ambassador ahead of friendly

The Confederation of African Football (CAF) has today confirmed that Morocco will not host the 2015 edition of the Africa Cup of Nations slated to take place from 17 January to 8 February. The decision was announced on Tuesday after a CAF executive meeting held in Cairo.

Morocco had requested to have the tournament postponed to 2016 over the Ebola outbreak in some African countries and especially West Africa, a region that is expected to send some teams to the Cup of Nations.

At the same time, CAF has disqualified Morocco from taking part in the competition next year following their breach of agreement to host the tournament.

The Executive however failed to name the new host nation but said they have received and are reviewing several applications.

Qualification matches for the tournament will also continue as planned on 14 and 15 November to select the final 15 teams that will join the new host nation for the finals in January.