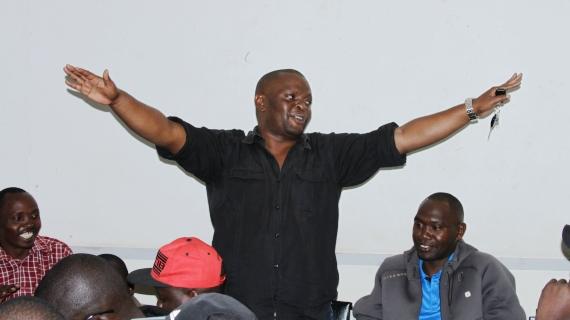 Sports Editor at Radio Africa’s Star Newspaper Chris Mbaisi has been elected the chairman of The Sports Journalists Association of Kenya (SJAK) with Mike Okinyi of Citizen TV beating Milton Nyakundi from Mediamax for the post of Secretary General in a hotly contested and first-ever sports journalists elections held at the Nyayo stadium on Friday morning.

A total of sixteen members contested for the available slots in an historic election that was presided over by James Akama. Also present as Observers were National Olympic Committee of Kenya (NOC-K) Secretary FK Paul and Athletics Kenya PRO Peter Angwenyi.

Mbaisi defeated his only challenger James Waindi from the People Daily collecting over 70 percent of the total votes cast at 44 against Waindi’s 18. Mike Okinyi on the other hand also head a heavy win with 40 votes against Nyakundi’s 22.

Kenya Broadcasting Corporation’s Vereso Mwanga needed a run off to beat Eric Ochieng for the organizing Secretary Position after she failed to garner 50+ 1 in the first round. The Organizing Secretary Position attracted the highest number of contestants with Dennis Mabuka of Goal.com managing 10 votes, Fredrick Omondi (6) and Robert Kiptoo (3). In the first Round, Vereso garnered 24 votes against Ochieng’s 19.

The People Photographer James Magayi was among the biggest winners of the day with a landslide win of 36 votes, 19 more than his closest challenger Gilbert Wandera who had 17 votes.

Sportsnewsarena’s Evelyne Watta was elected unopposed as new treasurer while Rabecca Gichana, Idriss Situma and Torome Tirike will serve as executive members. The officials will serve for the next four years.

NOC' s FK Paul lauded the journalists for showing the way on a democratic process that was conducted in a free and fair manner. He congratulated all winners and urged them to champion transparency.He further said that the smooth , free and fair election process should serve as an example for all federations and sports organizations in future.