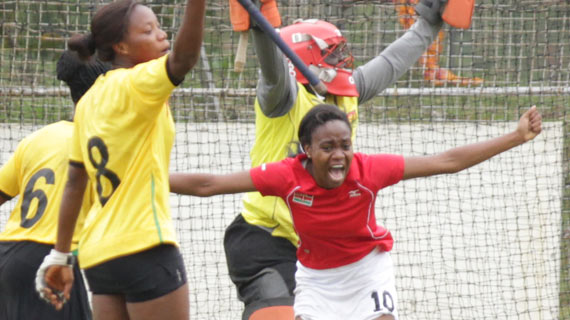 2013 Magharibi Michezo Awards best Hockey player of the year Betsy Omalla and best upcoming player of the year Pauline Naise last weekend steered Kenya to the next phase of the World Hockey League tournament to be held in Uruguay.

The Kenya team, captained by Betsy Omalla finished top of the group after beating Ghana and Tanzania in the first round of the tournament held in Nairobi.

Betsy Omalla who is also the Africa women defending Champions captain (Orange Telkom)  was named the Most Valuable Player of the tournament in Nairobi last weekend while Pauline Naise emerged as the top scorer with six goals to her credit all scored in one match where Kenya smacked Tanzania 22-0.

Kenya also defeated Ghana 1-0 in a hardly contested match on Saturday to finish the tournament with six points thus qualifying to represent Africa at the World Hockey League in Uruguay in February 2015.