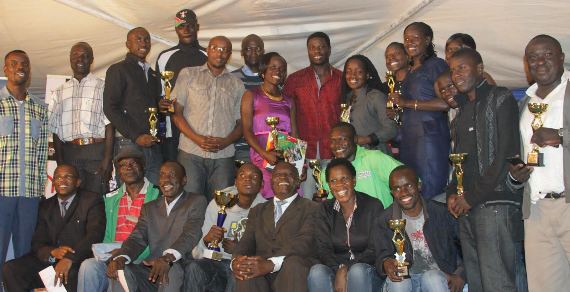 Kenya's most successful female soccer player  Doreen Nabwire has thrown her weight behind the Magharibi Michezo Awards  promising to work close with the organizing team towards the success of the second edition to be held this December in Bungoma County.

Nabwire played for Werder Bremen in the German Bundesliga  for one season before moving to play professional soccer and study in Holland for another season. She later returned to Nairobi for a year where she played and coached Kenya's Premier League Champions Matuu but is now back in Germany for another stint with top side FC Koln.

In her remarks , Nabwire lauded the MMA initiative terming it as a timely intervention that will seek to motivate many grassroots sports enthusiasts who work tirelessly towards the growth of the game. She said, "All over the world recognition has always worked towards sparking a good positive performance amongst athletes a good example being the Ballon d'or where all top world athletes strive to be. I am proud to be associated with the Magharibi Michezo Awards and I promise to offer my support towards the initiative.

Singling out women soccer as a big area of interest , Nabwire noted that the West Kenya region has been known to be home to great soccer playing schools, adding that she is keen to come to support initiatives that will work towards tapping some of the bets women soccer players in the region.

"We know that Western always produces top women soccer playing schools during the national school games. It is important for initiatives like Magharibi Awards to receive necessary support from the Federations in order to support the tapping of such talent."

The first edition of the Magharibi Michezo Awards was held successfully last December in Bungoma County. The awards scheme seeks to recognize and reward sports excellence from the West Kenya region with the long term vision of setting up sports development initiatives in the talent rich region known to be the bedrock of Kenyan sport.