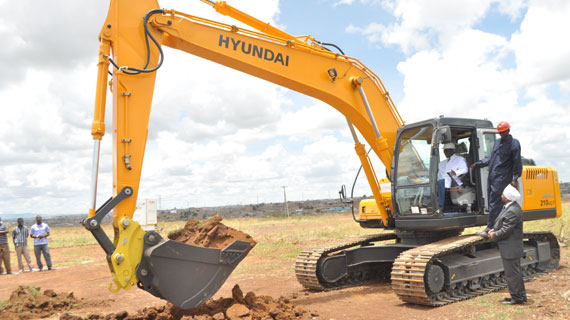 The Kenyan Sports Ministry on Tuesday morning commenced the long journey that will see Kenya get the first state of the art Sports complex and international Sports Academy set up in Nairobi at Kasarani.

This will also include the setting up of a high end doping laboratory as well as a sports medicine and research center. The cost of constructing the entire project will cost over 4.5 billion shillings and construction will commence immediately.

Minister Ababu Namwamba presided over the ground breaking ceremony at the Kasarani grounds where he announced that the government has already advanced 145 Million shillings that will go towards the construction of the first phase that will be completed within the next 36 months.

“This is it; we are ready to roll out this major project that will be a first in this region.” Namwamba says.

“The time for too much speaking without action is long gone, we need to move forward and commence the process of stepping up our competitive edge in the world of sports. This is the start of the long journey and we are excited that finally this is taking off.”  Namwamba said during the launch.

The first phase will include the construction of top range soccer fields (4), hockey fields, volleyball courts, cricket field and hostels and will cost approximately 850 Million shillings.

The second phase on the other hand will include the construction of a three star hotel, a world class aquatic center and an administration block.

“We want to transform sports to becoming a major industry and a major contributor to the economic development of this country and this can be achieved through projects like this academy we are launching here today.”

“The contribution this academy will make to sports in Kenya is tremendous. It will boost our efforts towards joining the big leagues in the world of sports because Kenya is endowed with massive talent that needs to be complemented by advanced training ahead of world competitions.” Namwamba added.