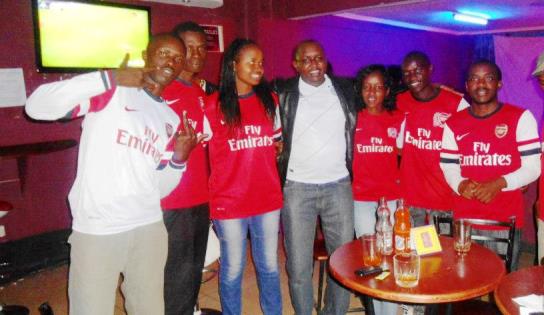 They may not have won the any serious trophy since 21st May 2005 at Millennium Stadium, Cardiff when they beat Manchester United to lift the FA Cup, but you can always bank on Arsenal fans optimism and unwavering support for their team. Despite the trophy drought, Arsenal is the fourth most valuable association football club in the world as of 2012, when they were valued at Ksh 110 Billion.

Though no official research has been conducted yet, a quick sample in popular  Kenyab soccer joints will reveal that the Arsene Wenger's coached club has the highest number of followers in Kenya. Only the Red Devils,Barcelona and a team that never walks alone can challenge that.

Known for their love of entertaining football and good mastery of history, a lazy walk in any Kenyan  town  you will definitely  bump  into a Gooner or Goonerette  well  colored  in their  “bonoko” merchandise.

The Kenyan fans have gone a mile ahead by forming a group named Kenya Arsenal Fan Club that runs  Facebook page Kenya Arsenal fanclub Page.The aim is to bring together Arsenal diehards in the country in supporting the team,create a chance for fans to make friends and also give back to the community.

The group has been engaging in noble causes aimed at making the universe a better place. This season, the group is at it again. Several charity events have been organized in Nairobi , Mombasa, Eldoret this weekend as follows;


Eldoret and its environ

Meeting Point:Nandi Park at 9am

Meeting Point:ZIWANI SDA CHURCH at 11:30am


Are you a Gooner or Goonerette? Please join this in this great cause to show some love and have a chance to make a new friend and discuss the latest from Emirates.