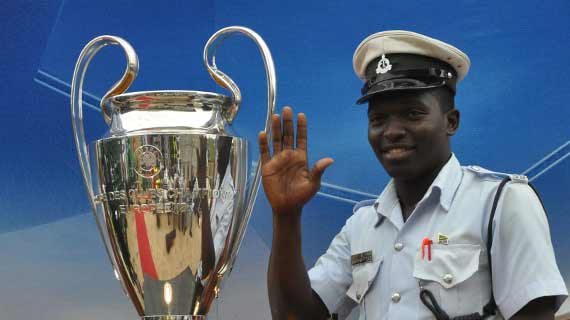 Malaga were devastated, shocked beyond disbelief. Their display was incredible, their desire resolute. Yet, after the final whistle, they felt firsthand what Bayern Munich had nearly 14 years ago; their wind was knocked out of their sales in the cruelest of ways. Even the fans at the Signal Iguna Park couldn’t believe the unfolding events, the controversies surrounding the goals couldn’t stop the Westfalenstadion from erupting.

Leading 2-1 in the 90th minute against Borussia Dortmund, courtesy of Joaquin and Eliseu’s goals, the latter’s cancelling Robert Lewandowski’s sublime equalizer with eight minutes of normal time left to play, Los Boquerones were left reeling after Jurgen Klopp’s side rose from the dead with two goals in stoppage time.

Marco Reus scored what appeared to be more of a consolation, with Malaga still having an away advantage of two goals, but the drama wasn’t yet over, what with Felipe Santana hitting the decisive third, with seconds remaining, to leave the Spanish side crestfallen and their fairy tale in their debut Champions League season in tatters.

Controversy reigned supreme, with both Eliseu’s goal and Santana’s dramatic winner scored from offside positions, but the Black Yellows will care less after securing passage into the semis of the Big Ears trophy. That result left the Dortmund players and fans clothed in ecstasy in a glorious night that was, otherwise, heading towards catastrophe.

Catastrophe would have struck Real Madrid had Galatasaray continued with their scoring spree at the Turk Telekom Arena, in the end losing 3-2 but going through 5-3 on aggregate. After Cristiano Ronaldo’s 8th minute opener had turned Gala’s objective into a herculean task, now requiring 5 goals to progress, the second half exploded incredibly.

It took 3 goals in 15 minutes for Gala to nearly put the cat among the pigeons and ensure Los Blancos were in for a bumpy ride towards the end. Former Gunner Emmanuel Eboue scored a thunderbolt equalizer before a Wesley Sneijder goal and Didier Drogba’s sumptuous back heel enabled the fans to dare dream.

But Jose Mourinho would have the last laugh, as Ronaldo reduced the deficit in injury time with a good goal of his own. Panic levels reduced, scare tactics done away with, the La Decima title is truly on, though the Castilian giants will have to ensure they play much better against the likes of Barca, Bayern or Dortmund.

Tonight, at the Juventus Stadium, Italian giants Juventus plays host to newly crowned Bundesliga champions, Bayern Munich, as the Old Lady seeks to overturn a 2-0 first leg defeat. It will be interesting to see how Juve react, what with being run over back by Die Roten in Germany last week.

As for moneybags PSG, they travel to Nou Camp to face the favorites, who could be missing the services of Lionel Messi. El Pulga got injured last week in the 2-2 first leg in France, but with Cesc Fabregas scoring a hatrick, with goals all over the Blaugrana attack, the Catalans should be able to cope well against a spirited Carlo Ancelotti side.

Will we be seeing a German-Spanish combo in the semis draw on Friday? Only tonight can tell.