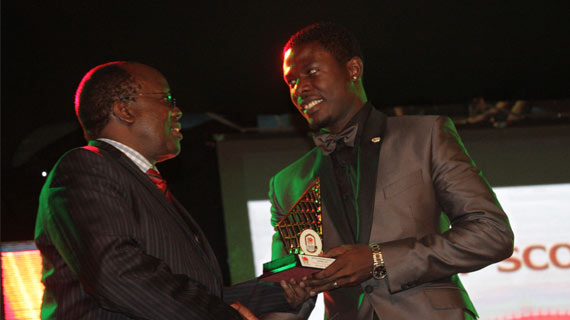 Allan Wanga during the awards

There is no lingering doubt about the potential of Gor Mahia’s deadly forward Dan Sserunkuma, his AFC Leopards counterpart Allan Wanga and his team mate Peter ‘Pinchez’ Opiyo.

However remarkably   good as they may be, the trio did not sweep top honors in the Wednesday’s FOYA gala night as had been widely anticipated.

Sserunkuma, a nominee in the best player category failed to retain the award he won last year, nor did he emerge as first runner up or second but went home empty handed. The same fate befell Wanga, who had to contend with the second runner up slot in the golden boot category.

Opiyo on the other hand, emerged as second runner up in the midfielder of the year category.

Interestingly, the trio was in rich vein in form in the second leg scoring crucial goals. Whereas Sserunkuma burst into the thick of action late in the second leg, a time Wanga was equally enjoying a good run, both strikers struggled in the first leg.

Opiyo equally had a horrid first leg to forget at Tusker where he was frozen out of the first eleven and only regained form in the second leg.

It is this hot and cold blowing by the trio that cost them the coveted awards. Perhaps the Armenia bound Sserunkuma will not be in the scene next season but for Pinchez and Wanga it’s a lesson well learnt .Consistent is key to growth.