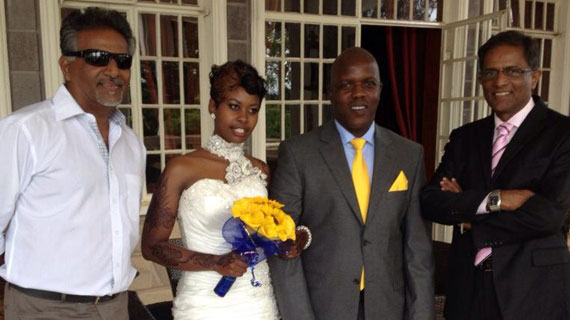 The  soft spoken  scribe  walked down the aisle on Saturday afternoon  at  St Joseph’s  Catholic  Church Limuru  where he exchanged vows with the love of his wife  Christine  Nduta in a colourful ceremony that was  graced by  family, friends, reputable media and sports  personalities.

Makori is well renowned for his fine writing skills and is the reigning IAAF journalist of the year, the first African scribe to scope the coveted award.

Besides scooping the global award, Makori has won several accolades in his long stint at the Nation Media Group where he works to date with Daily Nation newspapers.

Speaking shortly after exchanging his vows, an elated Makori thanked all those who have stood by him in his career promising to uphold the family values and be a good, loving husband and father.

The bride broke into tears of joy as she recounted her journey   with the scribe hailing him for standing by her side.

Known for his passion for sport and unwavering love for English Premier League defending champions Manchester United, Makori assured the love of his life that “she will come ahead of everything and from now henceforth the “Red Devils”will be secondary to his life.