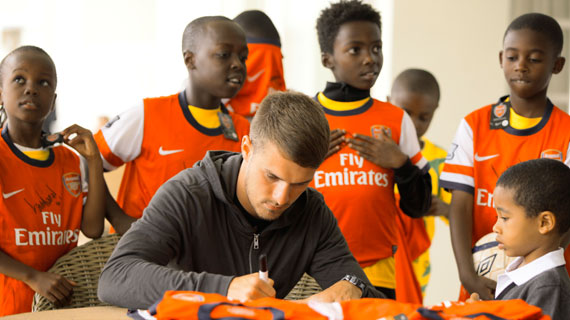 He added that Kenya’s sporting pedigree is well documented and should be nurtured to achieve more success. The Welsh midfielder was speaking to journalists after meeting young players from Ligi Ndogo who had paid him a courtesy call at the Hemingway hotel in Karen Nairobi.

The 22-year-old is the first active Arsenal player to visit Kenya in recent years. He jetted in on Saturday 25th May.

On Kenya’s football talent, the Welsh midfield kingpin who began his career at promoted side Cardiff City said, “this country has already produced exemplary international footballers and I have confidence that with initiatives like Ligi Ndogo, more talent is being nurtured for the future.”

The budding players who got the opportunity to meet and even play against the Welsh midfielder before he flies back to United Kingdom were aged between 10 and 12 years.

“Am very excited to have met Ramsey who is one of my favourite players at Arsenal, the team that I support,” said Andrew Kalama, one of the Ligi Ndogo players.