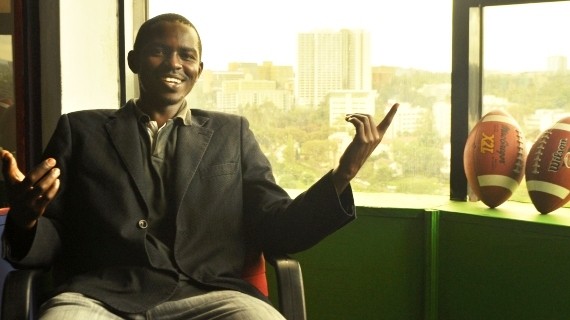 Michael Kirwa- The brains behind 89:59

In Kenya, getting football statistics can be a nightmare. An easy example, how can you get the number of caps Dennis Oliech has for the national team? Which team has the highest number of yellow cards or red cards in one complete season?

Some of these statistics remain a mirage not only to fans but to local football administrators as well. It is on this light that 24-year old Michael Kirwa bore the idea keeping statistics of the local league. At the beginning, he never actually thought it would be a great idea but only did it for fun and the love of the local game. Being a mathematics guru since primary school, he actually never found trouble generating simple stats.

He is the brains behind 89:59, a twitter and Facebook page that has become popular in the social media circles in giving stats on the Kenyan Premier League.

“I was attending a Kenyan Premier League match in 2009 at the Nyayo National Stadium. Sitted on the terrace side, I was wowed by Tusker keeper Boniface Oluoch but at that time, I didn’t actually know his name. Out of curiosity, I asked someone seated next to me who that was,” he narrates on how he got his inspiration to start 89:59.

“The guy was so pissed off that I did not know Oluoch and he actually never told me who it was. I was so ashamed that I did not know one of the best keepers in the country and that is where the interest to get to know players came from,” Kirwa told Michezoafrika.com.

From this he started listening keenly to the stadium announcer whenever he could read out the team sheets, at times being forced to go till the separating fence of the terrace stands and the VIP to clearly hear the names the announcer was reading out as he scribbled on his small notebook, mostly kept inside his red back pack that rarely leaves the comfort of his back. This was just for fun, and for his knowledge, still reeling from the 2009 embarassment.

The breakthrough for the birth of 89:59 came in 2010. Prior to the World Cup in South Africa, Kirwa being an ardent fan of Les Bleus, the French national team, would visit the Alliance Francais to read about his favorite team in archived magazines like L’Equipe.

It is while going through this publications that he came across something that caught his attention; Statistics on the French national team.

“There was this writer called OptaJean who would demystify the French national team in numbers. I was really fascinated and I wondered why we did not have such a thing in Kenya. I would form a habit of regularly visiting the Alliance Francais just to read his pieces until one day I decided to check him out on the internet. I found him but also realized there were tens of other statisticians of the Opta family,” Kirwa says.

From there he developed that interest and started off the 89:59 facebook and twitter pages. However, he could not write much in depth statistical analysis of games as data collection was a huge problem.

“I would occasionally just put silly stats to show that the page was active because I did not have much data to develop incisive stats. That was the biggest problem while starting. I would just rely on the announcer’s team sheet and watching games meaning games played outside Nairobi were never within the scope of 89:59.”

At the beginning of the 2011 season, Kirwa was optimistic of a great footballing year for the country especially with the league coming to its best in 2010 when Gor Mahia and Ulinzi Stars were fighting for the league crown. He sensed a great breakthrough in 2011.

“During the first nine games, I still relied on my ‘analogue’ way of getting facts. A bright idea came up when I decided to look for the stats from the KPL offices since I realized referees do submit their reports to KPL after every weekend. I went there and luckily enough they agreed to give me the statistics and to add the cherry on the cake, they also issued me with a press pass. Bingo! I moved from the terraces to the main stand,” Kirwa says with a wide grin on his face.

He has since developed from a simple statistics for fun to an almost professional outfit. His dreams;

“Teams may want to analyze themselves on their weak areas, general play, possession, passes and thus will require this information. It is a dream I am carefully holding on to and I am sure I will achieve it soon,” notes Kirwa.

He acknowledges that financial constraints are his biggest stumbling blocks but says he will not give up his dream as he has been in love with the game of numbers for long enough.

“You realize that I do mostly basic statistics. My dream would be to go incisive, look at possession, number of passes complete and the likes. Getting financial muscle to do that will be a big plus because it is only then that I can invest in machines and programs to calculate everything, employ data entry people, field people and so on,” he adds.

“I would also like to venture out of the KPL into Harambee Stars and the lower leagues but again, that will require addition of manpower because currently, I can use up to 50 hours a week on KPL alone.” He adds.

He says there are a lot of opportunities in Kenyan soccer but people are afraid of plunging into an unknown land. For him, his ambitions and dreams drive him every day and the sky can’t be the limit. He plans to take a course on football management since he says he can’t do statistics as he has learnt so much while on the job.

His advice to the youth;

“Never sleep on your dream. If you believe in yourself and work hard at it, you can achieve anything you want. Just because not many people do something doesn’t mean you cannot do it,” he adds.

Well for him, he can aim at the moon and land on the stars! Sky is no limit!