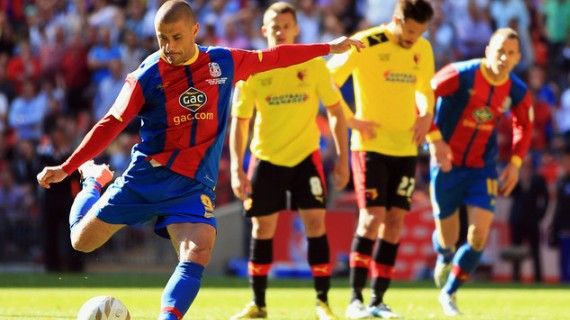 It took 120min to determine the premier favorite in the lucrative championship play-offs between Watford and Crystal palace. Two days ago, Bayern Munich and Borrussia Dortmund were lining up at Wembly and now it was the turn for the two sides led by their managers Ian Holloway and Gianfranco Zola to fight for one title.

Armed with seven players on loan out of the 11 starting lineup Watford impressed its fans with the players tackling the ball and making crosses. On the other side Palace embarked on counter attacks with Wilfred Zaha also on loan from Manchester United showing strength and pace to gallop the length of the field, holding off Watford defenders.

The Eagles dominated during 90 minutes of regulation play, though couldn’t get past former Arsenal goalkeeper Manuel Almunia in the Watford goal. A string of saves from the Spaniard pushed the game into extra time until a penalty won by Wilfried Zaha and scored by Kevin Phillips ended Watford’s dreams of joining premier league.

This was the fourth time Philip was taking part in a Championship play off and the first time he was winning it. What an emotional day for the experienced player who turns 40 soon.

Crystal has been absent from top flight football for eight seasons and this was an emotional day for all its players.

The 2012-2013 premier league relegated clubs to championship include Reading, Queens Park Rangers  and Wigan and they will receive a  new parachute payment of £48m over four years to help them absorb the huge losses in revenue that accompany dropping out of English football's lucrative top division.