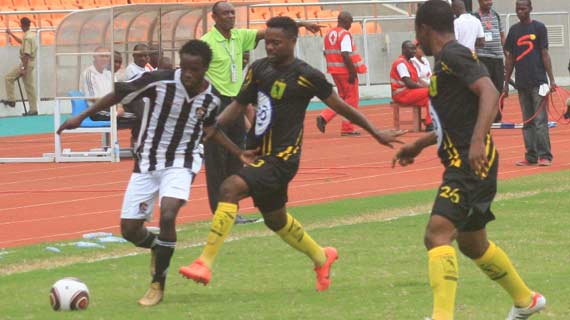 By TIMOTHY OLOBULU IN DAR 28 Jul 2012
Invitational side Vita Club from Congo beat Rwanda’s APR 2-1 in the third place play off match of the CECAFA Kagame Cup played on Saturday at the National Stadium in Dar es Salaam. Vita ensured they go home with 30,000 USDs as APR finished 4th to bag the last prize of 10,000USDs.

Both teams did not commit too much to the match as they sought to play in a more calm and relaxed manner. Vita were the hungrier in goal as they went on attack time and again. 19 minutes into the match Magola Mapanda opened the scores with a shot from outside the area beating second choice APR keeper Jean Luc Ndayishime.

Vita went on to threaten more in front of goal with Taddy Etekiama and Niemba Nkanu coming close for the Congolese boys.
APR’s striking force was not at its normal best as they lost so many chances Ndikumana Selemani and Jean Mugiraneza being the main culprits.

APR came back to the second period looking to equalize but were stopped right on their tracks with Kazadi Mutombo adding the second in the 69th minute. The goal killed APR’s motivation with fatigue clearly catching up.

Jean Mugiraneza would however give them a consolation in the 89th minute though it was too little too late.