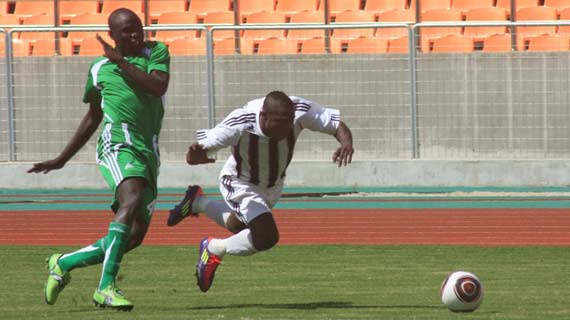 Wau Salaam vs APR of Rwanda /Picture by T.Olobulu

By TIMOTHY OLOBULU 14 Jul 2012
Debutants Wau Salaam from South Sudan were handed a rude welcome to the CECAFA Kagame Cup after being thrashed 7-0 by Rwandan champions APR. Leonel St. Preus scored a brace as the Rwandese made minced meat of the debutants from the world’s newest nation.

APR started the game as the hot favorites and they did not let down their tag totally out playing the boys from South Sudan. Captain Olivier Karekezi and Jean Mugiraneza wasted a myriad of chances for the Rwandese champion before Leonel St. Preus finally opened the scores for them.

Leonel calmly converted a penalty after Kabange Twite was brought down in the area by Edward Jovan Simon. Kenyan referee Antony Ongwae who handled the match well did not hesitate as he pointed directly to the spot.

Captain Karekezi would have easily made it 2-0 just five minutes later after he was let through by Dan Wagaluka, but the veteran skipper tried an unsuccessful lob over the Salaam keeper Uyu Abdallah.

APR however doubled their lead 25 minutes into the match through Selemani Ndikumana who side stepped the keeper after getting a cutting pass from the centre of the pack.  APR continued to dominate the game and would have had a goal or two but they chose to calm down the game.

Karekezi would finally get his name on the score sheet three minutes from the breather after he tapped in a cross from the second goal scorer Selemani. Selemani had done well to leave his marker on the left gasping for breath to bring in the cross.

Salaam had their own fair share of chances late in the half. Khamis Deshama had his free kick go inches over the bar while Captain Khamis Leone saw his header also fly over the bar.

Come the second half, APR continued from where they had stopped with Jean Mugiranza finishing off the fifth. Leonel completed his brace in the 53rd minute with a trademark finish before substitute Barnabe Mubumbyi added the sixth.

Jean Mugiraneza then beat off the offside trap in the 77th minute for goal number seven for the Rwandese, as Salaam looked clueless and overwhelmed.

Ngomirakiza Heriman would have made it eight with three minutes left to play but his rasping long range shot rattled the cross bar.

APR now sit top of the table with a good goal difference and have a great chance of qualification to the quarters, looking set to put behind last year’s misery. Salaam need more than a miracle to win their remaining two fixtures to get hopes of qualifying to the quarters.