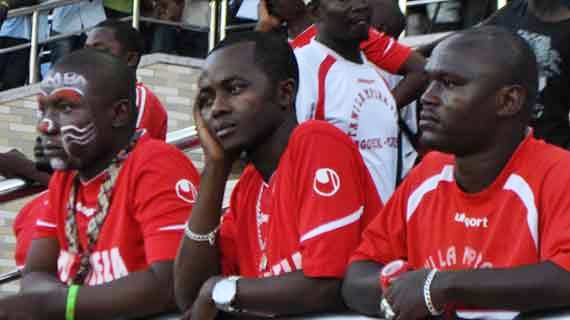 By TIMOTHY OLOBULU IN DARESALAAM 24 Jul 2012
John Bocco broke the hearts of Simba fans scoring a hat-trick as Azam beat Simba 3-1 to progress to the Semis of the CECAFA Kagame Cup. Wekundu wa Msimbazi as they are popularly known were totally overwhelmed by Azam who attacked from the first minute.

Simba wasted the first real chance of the game with 13 minutes on the clock, Uhuru Mwambungu shot wide after a nice cutting pass from Haruna Moshi. They were made to pay just four minutes later with John Bocco scoring his first goal.

The striker headed in strongly from an inviting cross delivered by Ibrahim Shikanda on the right. As the game progressed, Azam looked to grow more in confidence as pressure mounted on Simba from their home fans. In the 34th minute, Kipre Tchetche was denied by Juma Kaseja who tipped over his header from an Erasto Nyoni cross.

In the second half, Azam continued with their exploits and with just a minute gone on the clock, Bocco scored his second with a shot past Juma Kaseja after running past two Simba defenders.

Simba would however give a fight and in the 53rd minute, Shomari Kapombe gave them some slight hope with a shot that powered past keeper Deogratius Munishi.

Kenyan striker George Blackberry Odhiambo was then introduced in the 60th minute coming in for Kipre Tchetche. He was however not as effective as he was suffering from a bout of flu and was minimized in his running.

Bocco was not done with Simba as he hammered his final nail on Simba’s coffin with a thunderous shot from outside the area that beat keeper Juma Kaseja to his far right corner.

Azam who played to a barren draw with Tusker will now meet Congo’s Vita Club in the Semi finals on Thursday.