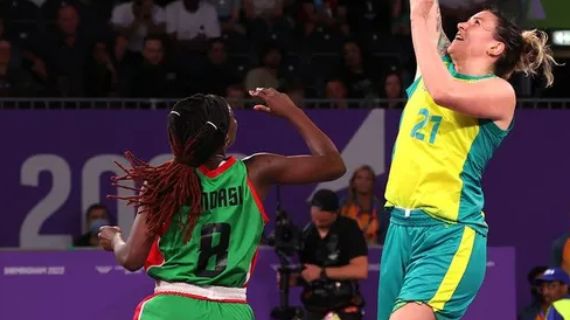 Hilda Indasi in action against KCA

Last year’s runners up in the Kenya Basketball Federation Premier League women’s category, USIU Flames started the 2013 campaign on a positive note after crushing fellow students KCA-University 68-24 at the Nyayo Gymnasium on Sunday.

USIU dominated all the four quarters in the one sided match getting 14 points in the 1st against KCA’s 2 points afterwards adding 22 points in the 2nd quarter with KCA improving their tally with 17 points to put the half time scores at 36-19. In the subsequent quarters Flames achieved 15 points in the 3rd quarter and 17 points in the last to take the win while KCA had 10 and 5 points respectively.

In the men’s premier league match Lions won their second match in the league after they beat Blazers 65-33. Lions dominated the 1st quarter with a convincing 27 points while Blazers could only manage 5 points but the 2nd quarter saw them outwit Lions with a narrow 10-8 win.

The 3rd quarter saw Lions hold off Blazers with a narrow 11-10 win but in the final quarter they sealed off their win getting 19 points against their opponents 8 points. Lions’ James Omune who signed from Ulinzi garnered 15 points while Joseph Koech gave Blazers 12 points.

The league resumes next weekend.