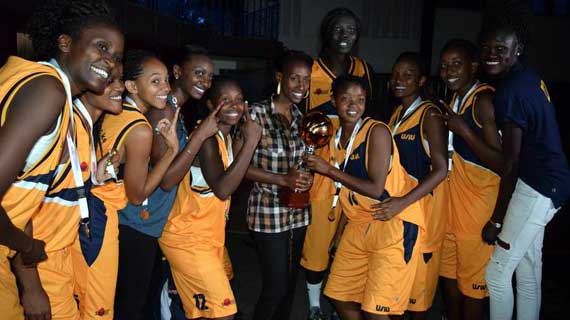 United States International University – Africa (USIU - A) are the new Champions of the Kenya Basketball  Federation Women Premier League  having dethroned defending Champions Kenya Ports Authority (KPA) with a 3-1  triumph in the best of Five series.

Having lost to the same side in the finals in 2013, USIU commenced the best of Five finals series with a crucial win away in Mombasa last weekend .Though they lost the second match, the Flames recovered to pull big wins in match three and four at the Nyayo stadium in Nairobi, results that saw them crowned new Kenya basketball Queens for the first time in history.

In the final match on Sunday, USIU won the day 81 -50. They won the first match in Mombasa 56-49 but KPA recovered to draw level a day later winning the second match 72-59.The students were powerful for the former Champions in match three and four in Nairobi winning 43 -77 on Saturday and 81-50 on Sunday.

The 2014 finals had to be rescheduled to the  new year since both teams delayed to take part in the playoffs finals since they were representing the region a the Africa Basketball Club Championships in Tunisia in December.

KPA Won the men’s edition of the Premier League having defeated Ulinzi Warriors in the finals played before Christmas.