Thunder roar past Ulinzi to make it six in a row 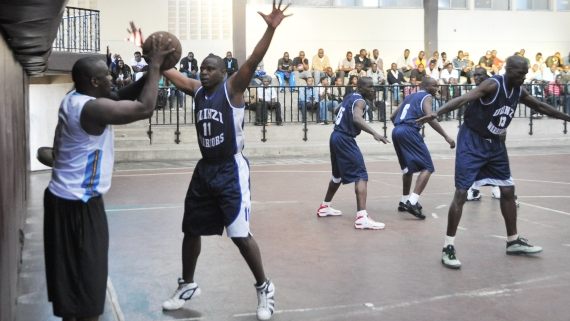 Thunder roar past Ulinzi to make it six in a row

Thunder basketball club remained unbeaten in the Kenya Basketball Federation Premier league after they beat Ulinzi Warriors 59-54 in a highly contested match on Sunday evening at the Nyayo Gymnasium.

Thunder has so far beaten Defending Champions Co-op Bank, USIU Tigers, Blazers, UoN Terrorists, Nakuru Club and Ulinzi became their latest victims to continue with superb start to the 2013 season. In the 1st quarter it was the Defence Forces side that took the game to Thunder who seemed out of touch despite efforts by captain Griffin Ligare. At the end of the quarter Ulinzi had the upper hand with 19 points against Thunder’s 10 points.

The pep talk at the break seems to have done wonders for Thunder and they came out guns blazing. They managed to sink in 21 points against Ulinzi’s 6 points to put the half time scores at 31-25 in favor of the Shauri Moyo based side. In 3rd quarter Thunder managed to hold off Ulinzi once more with a close 18-17 win to maintain the lead, the scores being 49-42 at the end of the quarter.

The last quarter saw Ulinzi rally back with a 12-10 win but it was not enough as Thunder took the day. Ligare who has been instrumental for the side scored an impressive 30 points for Thunder while his fellow captain William Ochieng gave Ulinzi 14 points.