Strathmore out for a double against Eagle Wings 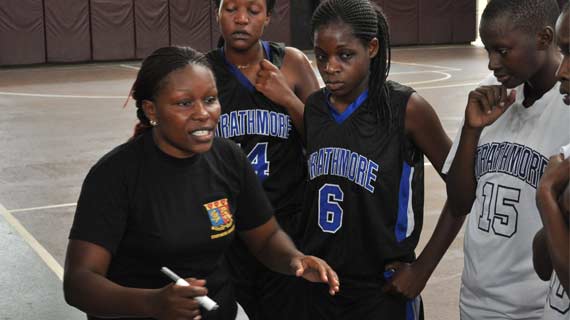 Strathmore out for a double against Eagle Wings

Strathmore Swords coach Sylvia Kamau knows well the task awaiting her side this weekend and despite admitting her side has a herculean assignment, she maintains her side is not under any pressure and will be approaching their remaining games with an aim of aligning themselves for a top finish slot in the regular season.

“In the first leg, we had a couple of loses that we shouldn’t have had and we’re looking forward to aligning ourselves properly for the playoffs especially  the first round because this gives you a better chance in the second round,” she said.

Swords, currently standing at the fourth position have back to back games this weekend against COOP Bank’s Kingdom Queens and defending champions Eagle Wings. Coach Sly reckons both games are big basketball matchups but is quick to admit her side is ready.

“For us to be safe, we must not collect any losses in our remaining four games especially this weekend,” she adds. Of interest will be their game against Wings especially after condemning the former champions to a twenty-point loss in their first leg meeting. “The Eagle Wings game will be a pride game because no team currently can topple them from the peak of the table but they don’t want to lose to us again, so they are going to work very hard,” she admits.

The presence of guard Rose Ouma besides Samba Mjomba makes Eagle Wings’ back court dreaded but Swords will certainly respond in kind with Grace Wanjiku and experienced Denise Apondi. “Six of their players have been training with the national team but we’re not going to take them lightly, we want to make it a double if possible, if not possible we’ll see how it goes. But it’s a win I think we can get if we work very hard,” she says setting stage to a duel that basketball fans will be looking forward to.