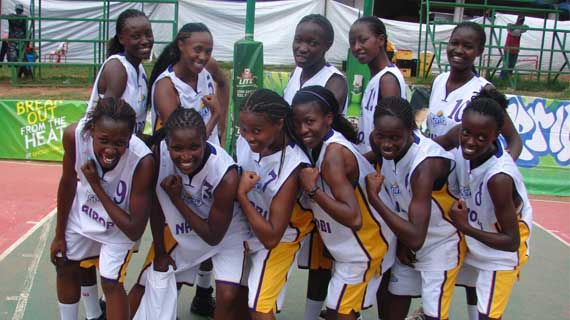 Nairobi City started their title defence on a high note in the ongoing East and Central Inter-cities Basketball tournament on Tuesday afternoon after they beat Entebee 82-56 in their first match.

The side which is coached by Strathmore Sword’s coach Sylvia Kamau took the 1st quarter with 22 points against Entebee’s 14 points then in the 2nd quarter sunk in 22 points again while Entebee had 18 points to put the half time scores at 44-32 in favor of Nairobi.

In the 3rd quarter Nairobi opened up the gap between themselves and their opponents and they got 22 points yet again while the Ugandan side could only manage 8 points to put the scores at the end of the quarter at 66-40.  The last quarter saw the two teams settle for a draw with both sides getting 16 points but that was enough to see Nairobi take the day.

Most Valuable Player in the African Cup of Nations qualifiers that were held in Dar es Salaam, Tanzania in January, Hilda Indasi who turns out for USIU Tigers in the KBF Premier League was at it again giving Nairobi 19 points followed by Susan Akinyi who sunk in 18 points.

Nairobi will face Mukono at 11 am on Wednesday in their second match at the tournament.