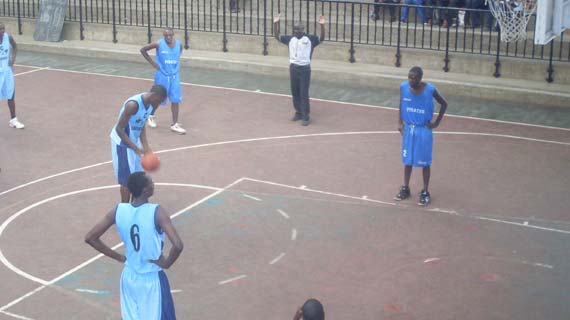 KCA-U vs KU Pirates in past Div One match

The Kenya Basketball Federation Division One league resumed over the weekend with 6 matches played at the Nyayo Gymnasium.

On Saturday Kenya College of Accountancy University were up against Kenya Airports Authority where the students were beaten 42-38 while in the second match of the day saw newcomers Zetech College overwhelm Trail Blazers 62-48. In the match Joshua Okumu gave Zetech 14 points with Felix Bwana sunk in 10 points for Trail Blazers.

In the last match played on Saturday Little Prince was up against Strathmore University (B) where the students managed to floor their opponents 59-43. Both teams are debutants in the Division One league after being promoted from the Nairobi Basketball Association (NBA) league. Mugambi Mawina had the highest points in the match giving Little Prince 19 points while Strathmore’s Michael Ligare had 11 points.

In the matches played on Sunday Radhi Ndalu’s Equity shook off last weekend’s defeat to Zetech when they defeated Parklands 70-46. Equity’s new acquisition Brian Obimbo scored 18 points while Kelvin Eboi gave Parklands 18 points. Strathmore University (B) continued with their top form in the league after they won their second match of the weekend beating KAA 70-53. Peter Shelton had a good outing as he gave the students 26 points as KAA’s Elvis Ochieng had 21 points.

The last match on Sunday saw KCA-U lose their second match of the weekend after they were beaten 48-56 by Umoja. The league resumes next weekend.