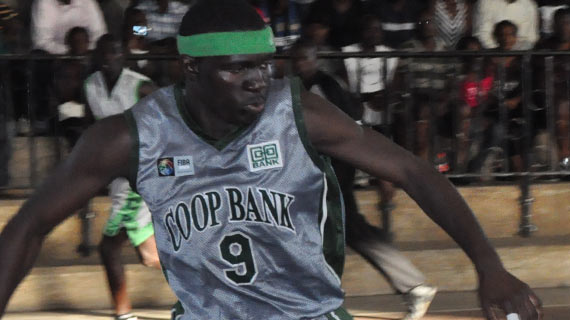 Kenya International and Co-op Bank player James Mwangi is optimistic that his side will be able to overturn the recent defeat they went through in the hands of Thunder basketball team as they face newly promoted Nakuru Club on Sunday in the KBF Premier League.

The 2102 Defending Champions were beaten 72-63, 3 weeks ago by Thunder and Mwangi has pointed out that his side will be going into the match against Nakuru with guns blazing, “we have been training hard and we will face Nakuru with the seriousness they deserve. We have set out to win and nothing else.”

Co-op over the last two seasons have been starting on a rather weak note and Mwangi blames this to laxity after winning the league, “as champions the players start the season a bit relaxed and you find that we lose simple games but this season we are going to avoid such a situation and take every game seriously.”

Co-op Bank will be going against Nakuru Club on Sunday at the Nyayo Gymnasium from 3:00 pm.