Hilda Indasi in top form as Nairobi shoots down Kampala 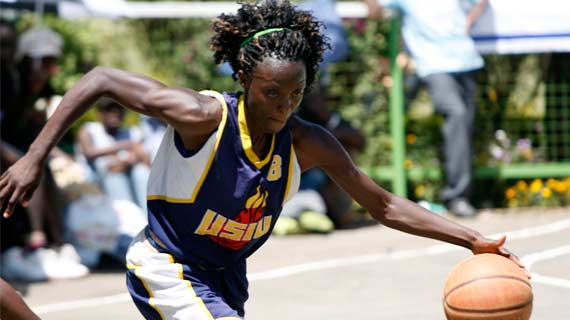 Hilda Indasi in top form as Nairobi shoots down Kampala

Indasi in a past match

USIU Flames’ Hild Indasi was in a class of her own as she hit 33 points on Thursday afternoon as Nairobi City beat hosts Kampala 'A' 62-44 in the ongoing East and Central Inter-cities basketball tournament.

Indasi who named MVP in the Zone 5 African Cup of Nations qualifiers held in January this year, which Kenya won bagged in 33 points her highest in the tournament since it began on the 29th. Indasi who is poised for another MVP award at the tournament owing to her form made an outstanding five 3 pointer shots in the match.

The 1st quarter of the match was a close one as it ended 17-14 with Kenya’s only representatives taking the lead. The 2nd quarter saw Nairobi maintain their lead getting 15 points while Kampala had 11 points. This put the half time scores at 32-25 in favor of Nairobi. The 3rd quarter saw Kampala hold off Nairobi with a single point getting 9 points against their opponents 8 points to put the scores at 40-34.

The last quarter is where Nairobi widened the gap against Kampala hitting 22 points while the hosts could only manage 10 points and the win sees Nairobi well on their way in defending their title having won their 4 previous matches against Entebee, Jinja, Mukono and Kampala A. Emma Nyakweba had 11 points for Nairobi while Flavio Okacho and Miriam Nyakima had 12 and 11 points respectively for Kampala 'A'.

Kenya will meet Kampala 'B' in the last preliminary match on Friday 4:00 pm.