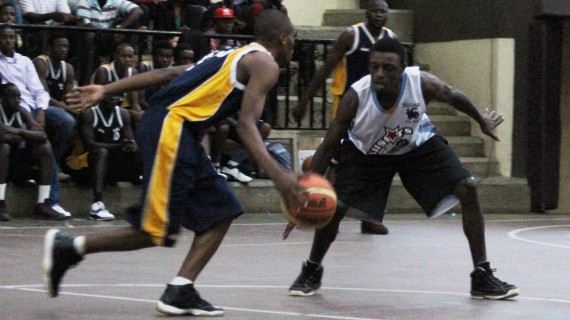 Action from the match

Thunder captain Griffin Ligare led his side to their second successive win  in the KBF Premier League after they beat University side USIU Tigers 71-60 at the Nyayo Gymnasium on Sunday afternoon.

Thunder beat the 2012 Defending Champions Co-op Bank 72-63 two weeks ago at the same venue and as much as it is early to predict anything, the form of the Shauri Moyo based team is worth noticing. Ligare hit an impressive 20 points in the match and was definitely the man of the match while USIU’s Eric Bosire had 14 points.

At the end the 1st quarter the Tigers had a 3 point advantage over Thunder getting 13 points against 10 points and went on further to extend the lead in the 2nd quarter with a 18-17 triumph to put the half time scores at 31-27 in favor of the students.

The 3rd quarter saw Thunder plot their come back and eventually take they day as they overcame USIU with a narrow 18-16 win then finished off their opponents in the last quarter getting 26 points against Tigers’ 13 points.

Speaking to michezoafrika.com Lugasi mentioned that their form is due to the team spirit that has been encroached in the players this season, “this season all the players decided to be serious and play basketball, last season we had to push guys but this time round its different and this has brought a lot of togetherness in the team and off course God’s blessings.”

Thunder so far has 4 points from their 2 wins in the league.