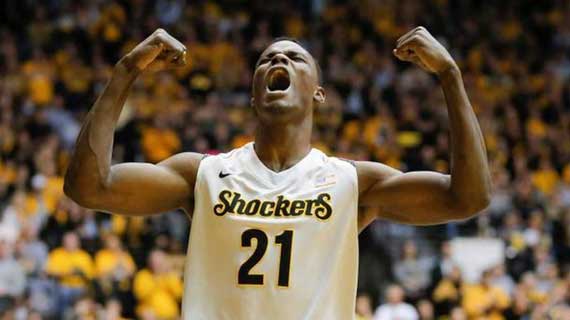 Former Maseno School Student Tom Bush Wamukota is fast breaking through the ranks as a promising basketball star in the United States of America.Wamukota is son to former Kenyan Volleyball International Dan Wanyama who is now Member of Parliament for Webuye West and Nancy Siboe who also played for the women national Volleyball team.

Born in Bungoma in 1993, the 7-foot Wamukota joined Wichita State University team late in 2014 from Kilgore (Texas) College and continues to impress coaches with his performance and growth.

His former coach at Kilgore Brian Hoberecht says, “He’s (Wamukota) got a nice jump-hook to both the left and right shoulder. He knows how to establish position. He’s got good hands, soft touch. The skill will catch up with the speed of the game. He is still thinking sometimes offensively.”

On Sunday Wamukota’s team –The Shockers - beat second seeded Kansas 78-65 in the NCAA championships to win bragging rights and also advance to the Sweet 16. His team will next take on third seeded Notre Dame in the sweet 16 on Thursday evening.

In an interview with the Wichita State team, Wamukota narrated how he started playing basketball at his home backyard with a paper ball. He says  he first made a basketball rim out of a bicycle rim and nailed it to a palm tree in his front yard in Bungoma and this seemed to have been the starting point for his bright basketball career.

He is currently studying International Business and playing in the NCAA .

Remember to vote for michezoafrika.com in the Bloggers Association of Kenya (BAKE) awards by logging on to http://www.blogawards.co.ke/vote