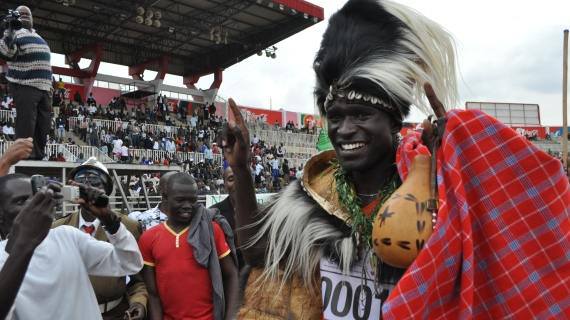 Not even the foul weather could stop world 800m record holder David Rudisha from victory in the New York Diamond league on Saturday night. The rains derailed the Olympic and world champion to a time of 1:45.14, his worst since 2009.

British prospect, Andrew Osagie managed to pip Olympic bronze winner, Timothy Kitum in the battle to be Rudisha’s runner up in 1:46.44 against Kitum’s 1:46.73.

Last season, Rudisha gave the New York leg of the global circuit racing centerpiece its signature performance when he blasted to 1:41.74 to underline his capability of lowering his own world record.

In other races Lydia Chepkurui won the women’s steeplechase for her second Diamond League victory on the bounce after reducing the field to the role of supporting cast in her event. Chepkurui won in 9:30.82 with Ethiopian pair, Etenesh Diro (9:33.76) who supplanted perennial runner-up Sofia Assefa (9:33.84) from her role occupying the minor podium places.

Obiri (4:04.84) also succumbed to the Ethiopian born Swedish world leader, Abeba Arigawi (4:03.69) who was a class above the field as the returning Beijing Olympics champion, Nancy Jebet Langat (4:06.57) placed just outside the podium.