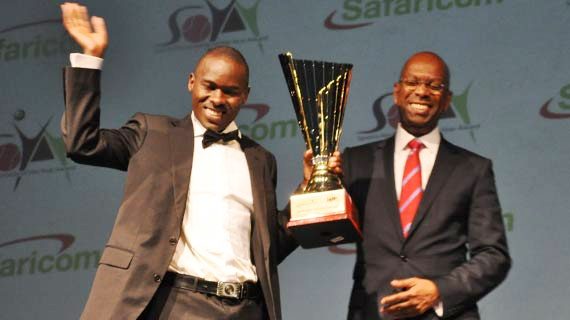 Vivian Cheruiyot and Patrick Makau are the newly crowned sports personalities of the year 2011 as announced during the 8th edition of the sports personality of the year awards (SOYA) event that was held on 14th December at the Arboretum grounds in Nairobi. The colorful occasion was graced by Ethiopian track star Meselech Melkamu alongside other dignitaries including Sports minister Dr.Paul Otuoma, his assistant Kabando wa Kabando, Safaricom CEO Bob Collymore amongst others.

Cheruiyot was also awarded the overall sports personality of the year award a title which she deserved after the spectacular performance in 2011.Early in the year, Cheruiyot won her 10,000m debut race in Punta Umbria. She then won double world championship titles (5000m and 10,000) during the 2011 world athletics championships in Daegu before winning the diamond league series title in September where she registered a new course record.

Recently she was awarded the best performance of the year award during the IAAF awards gala as well as the locally based Kenya Athletics Gala.

Patrick Makau overcame tough competition from last year’s winner David Rudisha in the sportsman of the year category. Makau is the reigning marathon world record holder with a time of 2:03:38, slashing 21 seconds off the previous record that was set by Ethiopia’s archrival Haile Gebreselasie in 2008. Makau brought back the record to Kenya after 13 years of its drought since the reign of SOYA founder Paul Tergat.David Rudisha missed out on the podium this season with Geoffrey Mutai and Julius Yego coming in second and third respectively.

Both Cheruiyot and Makau announced shifting their attention to the 2012 London Olympics scheduled to take place in the month of June. “I feel really appreciated by the athletics association and the country at large and I am motivated to stage an even performance in London come June.” uttered Makau.

The winners of the awards were selected by a panel of Kenyan sports writers. Other sports personalities that received awards in the various categories include: