Linda Oseso aims to better her personal record in Benin 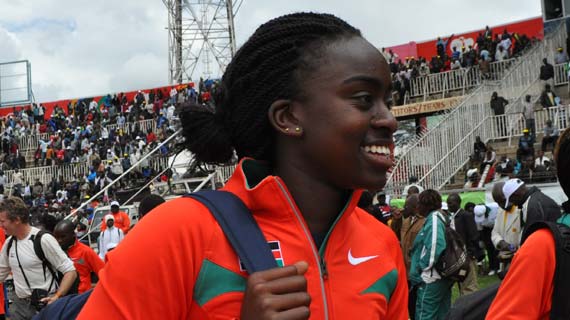 Linda Oseso aims to better her personal record in Benin

National Hammer record holder, Linda Oseso has set her targets of surpassing his own personal best of 60.80m during the 18th African Senior Championships in Athletics set to start on 26 June  to July 1st, 2012 in Porto Novo, Benin Republic.

The 22 year old who is based in California USA says this is her last chance to give an Olympic qualification a try though she believes her best shot at the Olympics is in 2016.Oseso who is the Kenyan team assistant captain says by 2016 she could have attained basic preparations in hammering, given that she has only been fully in the game for 4 years now.

“It feels good to represent my country in field events and I am looking forward to the games in Benin.” She said.

“It is unfortunate I failed to hit the required mark to qualify for the Olympics but I still have a last chance in Benin. However, if I don’t manage, I will still work harder to develop my skill so I can make it for the 2016 edition of the Olympics.” Oseso told michezoafrika.com.

The Kenyan team to the African championship games left Nairobi on Sunday morning for Benin but Oseso is expected to join the team in Benin on Monday night.

“Since I will be leaving straight from Benin, my flight had to be changed. This affected my entire journey and I will have to depart on Monday evening for Benin after everyone else. But we are all determined to retain our overall team title.” She added.

Apart from finishing in the medal bracket in her competition which starts on Wednesday 27th, Linda’s desire is helping the Kenyan team collect as many medals as possible.

“I have set my personal standards of throwing past 62m mark. I target breaking my own personal best I set during the preliminaries of the National Collegiate Athletic Association, NCAA on May 26 in Austin  Texas, I believe I can do much better, “” She said.

Linda previously represented Kenya at the National athletics championships held in Nairobi and during the Commonwealth games in Delhi India.

Oseso has called on the Kenyan officials to invest more in youth development in order to improve Kenya’s superiority in field events.

“In Kenya we need to start young. We lack such basic equipment and facilities to help in developing field events. I was lucky to have grown up in America where I have been since 11 years. There I have been exposed to the equipment that supports the growth of such games from a young age and good coaches as well. There is awesome talent in Kenya but this being a skilled sport it needs a lot of investment in equipment and skilled coaching from a young age.” She said.

“My coach John Dagata has been of great help for the last one year, the kind of guidance I have received under him is phenomenal, I hope to do the nation proud in Benin,” she said